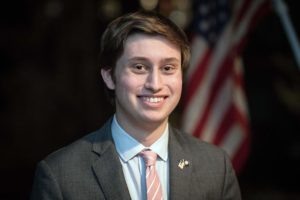 At the end of the 2016-2017 school year, I stood in front of the Arlington School Board along with fellow members of the Student Advisory Board leadership team and declared that we had just experienced “The Year of the Student” in the Arlington Public Schools.

Multiple times throughout the school year, large numbers of students had expressed themselves in front of the School Board and attempted to influence policy; something unseen before this year.

Most notably, on February 16 over 100 students, parents and staff from Yorktown High School walked into the Arlington Education Center and took their places facing the School Board. Nearly 40 of those students spoke out, providing over an hour and a half of testimony. They spoke out because after dozens of incidents of racism, homophobia, xenophobia and hate, the response from the Yorktown High School administration appeared to be non-existent. There was either no punishment or little punishment for those who made inappropriate and callous remarks. Targeted students had no tangible support from their school administration.

So, the students took their concerns to the School Board. Thirty-nine speakers later, the members of the School Board gave their responses. The Superintendent of the Arlington Public Schools, Dr. Patrick Murphy (whose contract was recently renewed a year early), said, “I am stepping up. This is not acceptable.” Yet, what has come to fruition from the outrage expressed by parents, teachers and, most importantly, students?

Speaking as the former Vice Chair of the APS Student Advisory Board, my conclusion is that seven months later we have yet to see a single proposed policy change. The School Board and the Superintendent heard, but they did not listen.

Today, we continue to hear a lot of talk, but there remains no tangible commitment by the Arlington Public Schools to make changes on this issue. The frustration that still exists among students, especially on this topic, leads me to call for a student representative to the Arlington School Board.

Under state law, student representatives are eligible to sit with school boards during public and closed meetings, introduce resolutions for consideration, and be able to say how they would have voted. However, there are still some restrictions. Student representatives are not allowed to vote on matters before the board, and they are not allowed access to confidential information, including information related to a specific student, teacher, or employee.

Last school year was a hallmark year for student involvement in the Arlington Public Schools. Like never before, students were able to translate their anger and disappointment on numerous issues into direct action – at times flooding the board room to make their voices heard on multiple occasions and for numerous issues.

The frustration that many students feel goes beyond not feeling included; it stems from a feeling that not only is the student voice not wanted, but that it is also not an important factor for consideration in the decision-making process. The relationship between the Arlington School Board and the Student Advisory Board is similar to the relationship between a teacher and a student and as long as that attitude of keeping students at arms-length exists, the voices of students will never truly be heard.

Now more than ever, students need a sign from APS that they matter, and a student representative on the School Board would show that the student voice is important. Student apathy toward the Arlington Public Schools is dead. It is time to include us in the decision-making process.

Graham Weinschenk is a former Yorktown High School student who graduated in 2017. He served as the Vice Chair of the Arlington Public Schools Student Advisory Board for the 2016-2017 school year. Outside of APS, he serves as the Secretary of the Virginia Young Democrats and will be attending the College of William & Mary in the fall.

END_OF_DOCUMENT_TOKEN_TO_BE_REPLACED

More Stories
Peter’s Take: Will There Be ‘Room For All’ in Arlington’s New Parks Plan?The Right Note: Favola Receives $1,500 Contribution Then Changes Sides on Towing Ordinance