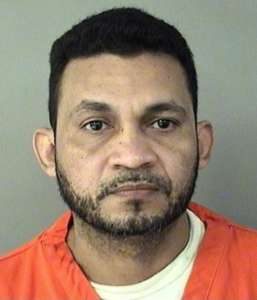 An Alexandria man will spend 32 years in prison for raping a woman on the Four Mile Run Trail in 2012.

He brandished a knife and dragged the victim off the trail and sexually assaulted her. After the assault, the suspect fled the scene and the victim took herself to Virginia Hospital Center and the police were called.

Investigators discovered his connection to the sexual assault after an attack at a Columbia Pike motel in 2016.

On January 12, 2016, a woman was involved in escort-related activity at a motel when two men she did not know entered the motel room and raped her, stole her personal items and fled.  The men were caught by plain-clothes police officers nearby, and DNA evidence linked Lopez-Velasquez with the unsolved 2012 rape.

Lopez-Velasquez previously pled guilty in the January 2016 case and received a 10-year sentence.

Elmer Umberto Lopez-Velasquez, 39, of Alexandria, VA was sentenced on Wednesday, September 13, 2017, in the Arlington County Circuit Court to thirty-two years in prison for his role in a rape on a shared-use trail in 2012. Judge Daniel Fiore sentenced the defendant to fifty years with eighteen suspended for the charge of Rape and five years for the charge of Strangulation. The two sentences will run concurrently.

On January 12, 2016, a female victim was involved in escort-related activity at a motel in the 3000 block of Columbia Pike when two suspects unknown to the victim knocked on the door. Upon entering the motel room, the suspects sexually assaulted the victim while using the threat of a weapon to hold her against her will. The suspects stole the victim’s personal belongings before fleeing the room. The suspects were apprehended by police working a plain clothes detail in the area. DNA evidence recovered from this assault was submitted to the state lab for analysis and the results linked this case with an unsolved 2012 rape.

On July 3, 2012, a 23-year-old female victim was jogging on the Four Mile Run Trail near mile marker 44 when she was confronted by an unknown Hispanic male that she had passed minutes earlier. The suspect brandished a knife and drug the victim off the trail into taller vegetation where he sexually assaulted her. After the assault, the suspect fled the scene in an unknown direction and the victim transported herself to Virginia Hospital Center where police were called.

Arlington County Deputy Chief Daniel J. Murray, Commander of the Criminal Investigations Division said, “The residents of Arlington County are significantly safer now that a predator has been removed from our streets. These horrible offenses and attacks on our community will be relentlessly pursued by our detectives. The message to criminals and the families of the victims is clear – Arlington County will not waver in our commitment to investigate and prosecute violent crimes – no matter how much time has passed.”