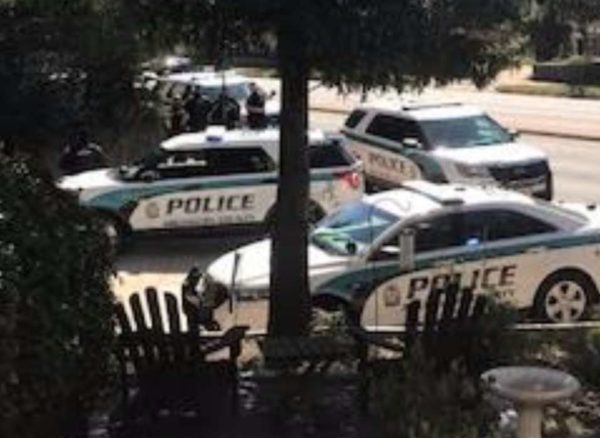 Police have arrested a man suspected of stealing from a woman on S. Glebe Road this afternoon.

The suspect reportedly stole an “unattended bag” from a woman who was shopping in the Unit block of S. Glebe Road. Although police do not release the names of businesses where crimes occur, that block is home to a Goodwill store, among others.

The suspect fled the scene and police took him into custody nearby, on the 100 block of S. Glebe Road. An ARLnow tipster who lives near the arrest scene said numerous police vehicles responded and officers urged neighbors to lock their cars and doors.

ACPD says the investigation is ongoing but there is “no threat to the public.”

GRAND LARCENY (Significant), 2017-10040137, Unit block of S. Glebe Road. At approximately 11:26 a.m. on October 4, police responded to the report of a larceny that had just occurred. Upon arrival, it was determined that a female victim was shopping when her purse was stolen from inside a shopping cart. When witnesses attempted to stop the suspect, he fled the area on foot into the National Foreign Affairs Training Center where he was detained until Arlington County Police arrived on scene. James Mitchell, 53, of No Fixed Address was arrested and charged with Grand Larceny. He was held on no bond.