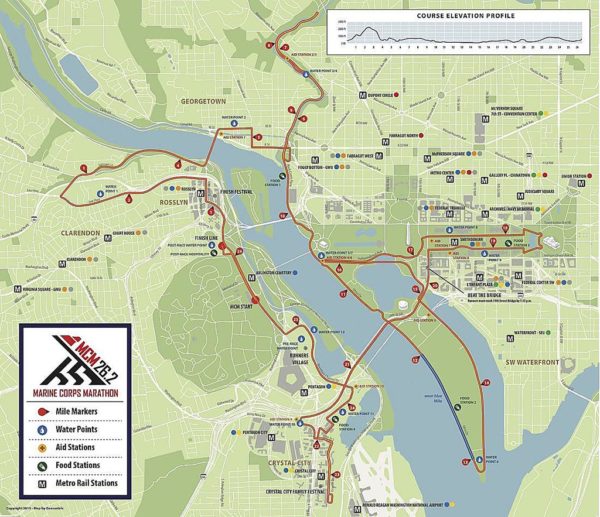 The 42nd Marine Corps Marathon and MCM 10K will bring a bevy of road closures to Arlington County this coming Sunday (Oct. 22).

Opening ceremonies for the races begin at 6:30 a.m., with the wheelchair race starting at 7:45 a.m. and the marathon and 10K beginning at 7:55 a.m. Around 30,000 people are expected to take part in the races, which run through parts of Arlington and D.C.

There are a number of good vantage points in Arlington to watch the runners, including the beginning and end of the marathon in Rosslyn and some of its final miles in Crystal City.

Per an Arlington County Police Department press release, the following roads will close on Sunday:

5:30 a.m.-4:00 p.m.    Exit 8B, Southbound 395 exit to Southbound Route 1. Motorists seeking to enter Crystal City are advised to continue south, take exit 7 (Glebe Road), and make a left at the traffic signal to travel south on Glebe    Road.  Continue south for approximately 2 miles, where Glebe Road intersects with both S. Eads Street and Route 1. Both thoroughfares lead into Crystal City.

While roads will close for the race, Metrorail will open two hours early at 6 a.m. and have extra trains on the Blue and Yellow Lines. Metro said the extended hours, now a rarity compared to years past, are “funded through an agreement with event organizers.”

Travel tips from a Metro press release, after the jump.

Pentagon Bus Terminal – Due to the event, all Metrobus service that normally operates to/from the Pentagon will be diverted to Pentagon City on Saturday, October 21, until 2 p.m. to accommodate the MCM Kids Run and all-day Sunday. Additional staff will be on hand at Pentagon City Station to assist bus customers.