An Arlington County-based company is at the forefront of strengthening wireless networks amid exploding demand, and experiencing rapid growth of its own.

Federated Wireless works to provide more spectrum for mobile networks for businesses and ordinary citizens, which allows devices to connect to the internet and communicate with each other.

Founded five years ago, the company just took on $42 million in new funding, including from telecommunications companies. Federated Wireless is set to move to a new office across from the redeveloping Ballston Quarter mall on Wilson Blvd and hire more engineers and developers. It also has smaller offices in Boston and Silicon Valley.

Federated Wireless is working to make the new airwaves available for more uses while ensuring they do not interfere with each other. That includes for businesses like grocery stores, who want to automate cash registers and need to use a network to do that, as well as for factories, delivery and logistics companies and the like. It is also designed to improve service indoors, and responds to where the needs are greatest.

As more and more look to use high-speed networks, they experience slow-downs, and that will only get worse, the company said, as usage is set to triple by 2021.

The Federal Communications Commission in 2015 allowed some of the airwaves to be for public and private use through its “Citizens’ Broadband Radio Service” initiative, which makes airwaves not being used by the U.S. Navy for flight operations and satellites open for public consumption.

“We find out who you are, what hotspot you’re going to turn on, we track you in terms of your use and need and we track all the airwaves around you and we basically run an inventory system 24 hours a day and make it available,” Federated Wireless CEO Iyad Tarazi said. “Instead of making it rigid, ‘If I’m going to use it, I have to have it in the entire city or I won’t get started.’ It’s very much a sharing model.”

Tarazi said Federated Wireless leads the way on researching how to make the spectrum more widely available in part because of the research institutions and government agencies located in and around Arlington. 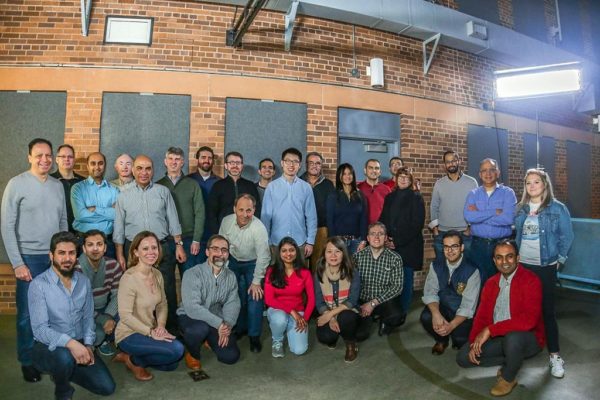 For years, such usage was reserved mostly for the military, but with partners like Virginia Tech’s local campus and research being done by the likes of the National Science Foundation and the Defense Advanced Research Projects Agency, Tarazi said Arlington leads the way.

The industry is continually evolving, with the likes of Google also involved in trying to take advantage of the new airwaves for its own products. With more than 80 companies as partners in an alliance researching the subject, including cable companies like Comcast and Verizon, chip makers like Intel and equipment makers like Nokia, Tarazi said things continue at a fast pace.

And Tarazi said the new office comes at the perfect time, as more and more people and businesses want to connect to mobile networks every day. The technology was first widely used by the military, but has since expanded to all areas of life.