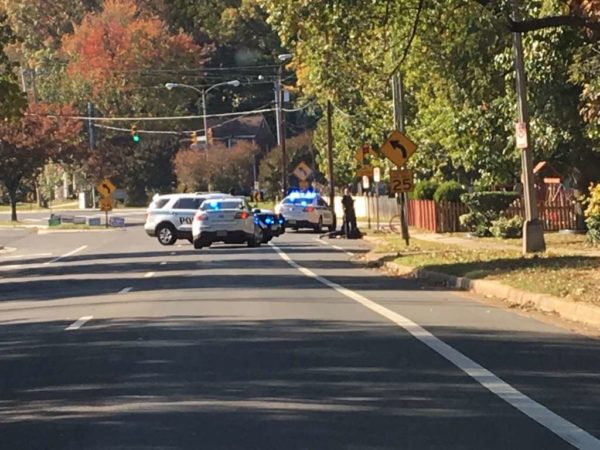 A man tried and failed to rob a local pharmacy, and the resulting police response led to an arrest but not of the suspect.

ARLnow reported on the robbery and the subsequent police search for the suspect as it happened this past Thursday.

Police say a man entered the Arlington Pharmacy on Wilson Blvd in Bluemont just after 2:15 p.m. He “displayed a note demanding prescription drugs and implied he had a weapon,” but ended up leaving without any drugs.

Officers quickly began searching the area for the suspect — described as “a tall, thin, white male, clean shaven, approximately 5’10 to 6′ tall, in his 20’s, wearing a black baseball hat” — and an officer driving along George Mason Drive spotted a man who matched the description riding a bike down the street.

The man refused orders to stop and was ultimately tackled by an officer after nearly running the officer down with his bike, according to police. It was later determined that he was not the pharmacy robbery suspect but was wanted on a warrant from Fairfax County.

More from an Arlington County Police Department crime report, below.

ATTEMPTED ARMED ROBBERY, 2017-11020165, 5500 block of Wilson Boulevard. At approximately 2:19 p.m. on November 2, police were dispatched to the report of a robbery that had just occurred. Upon arrival, it was determined that a male suspect entered a pharmacy, displayed a note demanding prescription drugs and implied he had a weapon. The suspect fled the scene on foot without any items. Officers canvased the area and a K-9 track was initiated with negative results. The suspect is described as a tall, thin, white male, clean shaven, approximately 5’10 to 6′ tall, in his 20’s, wearing a black baseball hat, black sunglasses, light colored sweatpants, a black sweatshirt and dark shoes. The investigation is ongoing.

ASSAULT ON POLICE, 2017-11020166, S. George Mason Drive at S. Buchanan Street. At approximately 2:30 p.m. on November 2, while canvasing the area, police attempted to stop a subject matching the description of a suspect wanted for attempted armed robbery. The suspect, who was traveling on bicycle, failed to stop, ignored the officer’s commands and continued riding away from the officer. Another officer in the area attempted to stop the suspect on foot but the suspect continued traveling in the direction of the officer. The officer was able to move out of the way and take control of the suspect. The suspect was non-compliant during the course of the arrest. Show-ups were conducted and the suspect was determined not to be related to the armed robbery, however, the suspect was determined to be wanted out of Fairfax County. Aaron Johnson, 28, of Oakton, VA, was arrested and charged with Assault on Law Enforcement, Resisting Arrest and the outstanding warrant.