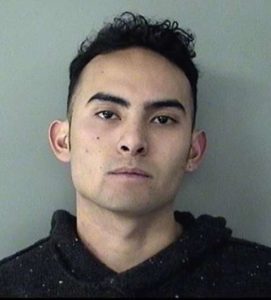 A 22-year-old Woodbridge man has been charged with malicious wounding after sending a woman who tried to help him to the hospital.

The incident happened early Saturday morning in Clarendon. Police say the man was kicked out of a local bar for “being disorderly,” and a woman was trying to calm him down when he “became combative and assaulted her.” He then struck two witnesses who tried to come to the woman’s aid, according to police, before officers arrived and he was arrested.

MALICIOUS WOUNDING, 2017-11180016, 1200 block of N. Herndon Street. At approximately 12:33 a.m. on November 18, police were dispatched to the report of a fight in progress. Upon arrival, it was determined that the suspect was removed from a restaurant for being disorderly. When the female victim attempted to calm the suspect down, he allegedly became combative and assaulted her. Two witnesses came to her aide and a physical altercation ensued where the suspect struck both witnesses. The female victim was transported to Virginia Hospital Center with non-life threatening injuries. Brandon Jordan, 22, of Woodbridge, VA, was arrested and charged with Malicious Wounding and Drunk in Public. He was held on no bond.