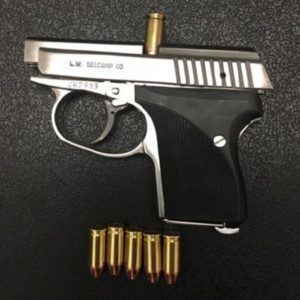 An Arlington man had what Transportation Security Administration officials called “a bad start to the new year” after he tried to bring a loaded gun onto a plane at Reagan National Airport.

TSA officers spotted the .32 caliber handgun (pictured above) in the man’s carry-on luggage yesterday morning (January 4). It was loaded with six bullets, including one in the chamber.

After spotting the handgun on the X-ray monitors in the airport’s security checkpoint, TSA officers alerted Metropolitan Washington Airports Authority police officers, who confiscated the gun and cited the man on a state weapons charge.

Airport operations were not affected. The TSA said it was the first gun caught at the airport so far this year. In 2017, officers caught 13.

More from the TSA:

Passengers are permitted to travel with firearms in checked baggage if they are properly packaged and declared. Firearms must be unloaded, packed in a hard-sided case, locked, and packed separately from ammunition. Firearm possession laws vary by state and locality.

As a reminder, individuals who bring firearms to the checkpoint are subject to possible criminal charges from law enforcement. In addition, TSA has the authority to access civil penalties of up to $13,000. A typical first offense for carrying a handgun into a checkpoint is $3,900. The complete list of penalties is posted online here: https://www.tsa.gov/travel/civil-enforcement.

TSA has details on how to properly travel with a firearm posted on its web site here: http://www.tsa.gov/traveler-information/firearms-and-ammunition. Airlines may have additional requirements for traveling with firearms and ammunition. Travelers should also contact their airline regarding firearm and ammunition carriage policies.