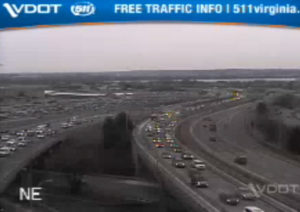 The threat of freezing rain has prompted early dismissals for students, government employees and private sector employees alike, but so far few if any problems have been reported in Arlington.

The early dismissals did create an early rush hour on local highways, as workers and students headed home, but here in Arlington roads and sidewalks remained passable and largely free of slick spots, despite a wave a sleet earlier this afternoon.

The precipitation is over for now, but more is possible this evening. A re-freeze is also threatening to make tomorrow’s morning commute treacherous.

The following tweets show activity during the two-hour-or-so span from the start of the sleet to the heaviest of the traffic.

Due to inclement weather, Marymount will close at 2 p.m. on Monday, January 8. Shuttle service will run on a regular weekend schedule until 5 p.m.

Trucks throughout the district have begun patrolling and treating roads (where needed). People have also headed home from work early. Factor in extra time to get home and pls be patient.

A very good sign!! Rain and sleet melting on my car. I was expecting ice!! Still bad in spots especially North and West of #DC so be careful pic.twitter.com/LX6loV2UpB

Rain and sleet in Clarendon as well. So far, sidewalks are wet but not slippery. https://t.co/M3NUeIee3f

Runways remain open for landing/takeoff, and airfield surfaces have been treated in advance of possible freezing rain. Airlines are deicing planes. Expect some flight delays and cancellations. https://t.co/tYs3n9HI8p

Traffic not too bad in Arlington as sleet arrives and workers head home, with the exception of heavy westbound traffic on I-66 pic.twitter.com/Pm16A1ftyV

For those trying to decide whether to leave now — it might actually be a good idea to just stay and work the day. As sleet exits, temperatures will warm. Refreeze possible later after the sun sets, but evening commute should be okay on treated main roads.