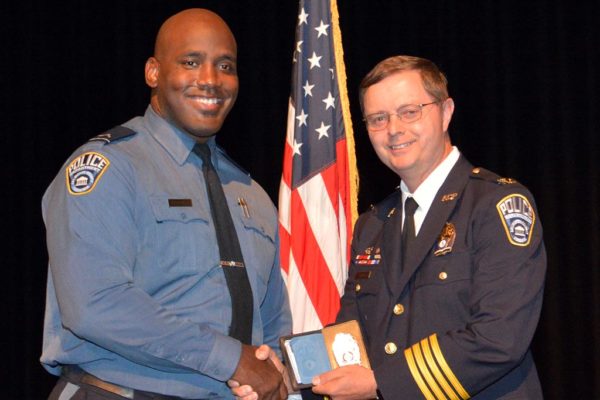 A former player in the National Football League now patrols local streets as a Corporal in the Arlington County Police Department.

Dorian Brooks spent two seasons (2010-2011) as an offensive lineman for the Pittsburgh Steelers after graduating from James Madison University and signing a free agent contract with the NFL after going undrafted.

Brooks joined ACPD in 2012, and since then has worked in patrol on the south side of the county. He was promoted to Corporal from Police Officer II in July.

In an interview with Go Law Enforcement, which has resources for those looking to go into policing and similar fields, Brooks said there are plenty of parallels between his current and former jobs.

“There are a lot of parallels between law enforcement and football,” he said. “Specifically, with me playing offensive line, you have to protect the quarterback, you’re the unsung heroes. we don’t do it for the glory, we just have great times but at the same time it’s a tough job to do. so I feel like that translated in a way, plus the camaraderie of the game of football, I could draw that parallel.”

Brooks’ brief NFL career included appearing in Super Bowl XLV in early 2011, at the end of his rookie season, a memorable experience for the first-year player.

“It was an incredible experience for me, that was my rookie year, so I’m 22-23 years old at the time,” he said. “Being able to make it to a point where a lot of guys spend their entire career not getting to that point, it was a great experience.”

Even when he was playing football in college and professionally, Brooks said he always had other interests, and had thought of joining the military after high school before going to JMU.

When he left the NFL, his wife was starting an OB-GYN residency in Washington, D.C., and after some research, Arlington’s police department came up as a place to work. He noted that his father and stepmother both served in the military.

“I’ve always had an appreciation for service,” Brooks said. “[I] kind of stumbled across it once I stopped playing football and I had to make a decision on what I was going to do.”

Since then, Brooks said he has found his size to be a benefit, especially as, he said, people “maybe think I’m one type of person, and once we have a conversation they might think, ‘Oh I would never have guessed you’re this type of person.'”

And for anyone looking to transition into law enforcement, Brooks said anyone can flourish regardless of their prior experience.

“Go into it knowing that you don’t have to have per se a criminal law background. you don’t have to be in criminal justice,” he said. “I tell students or folks who come over from the military, they feel that they have to have this to be a cop. I work with people who have English backgrounds, history backgrounds, business backgrounds. I think that’s part of it that really helps with the people we interact with, that it’s not just one type of person. It’s not just one type of person that becomes a great officer.”