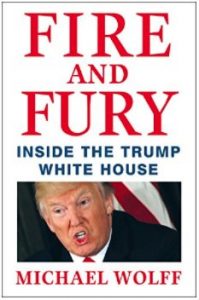 Arlington Public Library is struggling to keep up with demand for “Fire and Fury,” Michael Wolff’s exposé on President Donald Trump’s White House.

With a three-week checkout policy for books, it could take weeks — even months — for patrons to get their hands on a copy.

But some relief could be on the way. The library has ordered 61 new copies of the book, according to the library catalog website.

By comparison, demand for the #1 New York Times bestseller in fiction, “The Woman in the Window,” is lower. There are 215 holds on 35 copies. The book by A.J. Finn follows the story of heavy drinker who witnesses a crime near her Harlem townhouse.

“It’s disgraceful and laughable,” she said at a recent press conference.

Read more →
More Stories
The Right Note: Time for the County Board to Step Up on MetroNestle Employees Expected to Finish Rosslyn HQ Move By Month’s End