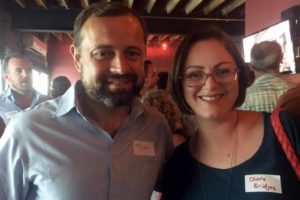 If you lived in Arlington during the 2017 Virginia elections, you have probably been visited by canvassers a few times before the November 7 election who wanted to remind you to vote.

In fact, the number of those visits were likely closer to five than to just one. Getting out the vote volunteer numbers increased, in Arlington and beyond, as interest in local, state and federal politics has surged.

After last year’s presidential election, numerous grassroots groups sprung up throughout the country, and Arlington was no different. Whether they grew out of the call to huddle from the Women’s March on Washington, the Indivisible Guide, or a group of friends, these organizations have over the past year become a persistent facet of civic engagement and a steady source of activism.

In just the 8th Congressional District encompassing Arlington, Alexandria, Falls Church and parts of Fairfax County, these groups have members in excess of 7,000 people.

Although there were initial concerns about their expected longevity, most of the groups continue to flourish and improve their operations, focusing on a few items at a time and directing their group members to take action.

Although the primary focus continues to be the on the Trump administration and its appointees, as of mid-2017 most groups also developed a cohort of individuals focused on local politics with a specific target on getting out the vote activities such as calling, texting, and canvassing as well as registering voters.

Individuals in three Arlington groups that I am aware of and participate in — Indivisible Arlington, We of Action (WofA), and HEAR Arlington — “adopted” Virginia House of Delegates candidates not just in Arlington but all over the state.

The adopted candidates had grassroots group members canvassing for them and making calls in their districts to drum up support and ensure a good turnout. We believe these efforts were a key to victories in numerous House districts across the Commonwealth as well as the statewide races for Governor, Lt. Governor and Attorney General.

The 2017 election may be over, but the grassroots activists inspired to work so hard in 2017 show no sign of slowing down now that we are in 2018. Energized by the significant wins in the Virginia House of Delegates and motivated by all that has been learned, groups are mobilizing to watch and promote or oppose legislation being discussed in the 2018 Virginia legislative session.

Indivisible Arlington has hosted training sessions explaining the process by which bills become law and some of the inner workings of the committees and chambers in the General Assembly. VA PLAN (Virginia Progressive Legislative Action Network), a coalition of members from grassroots groups all over Virginia in which WofA plays an important role, has organized a legislative alert network to raise awareness of bills that promote or hurt progressive goals.

One can only assume that groups across Virginia will join those in Arlington to ensure that every bit of legislation passed in this General Assembly session will get the level of scrutiny this highly educated and well trained mass of volunteers can give.

The activism picture in Arlington is certainly a good example of what we are seeing all over the country. Groups formed primarily to fight against what they see as a Presidential Administration without respect for American values have dug their heels in and created coalitions that ensure the ongoing vitality of grassroots activism.

The focus continues to be on keeping the Trump Administration accountable and also fighting against the Administration’s policies that are hurting our County, our state, our country, and the international community.

The grassroots activists, with their electioneering and legislative work, are now on the offensive as well as playing defense. Expect to see Arlington activists pushing for or against legislation in Richmond and helping grassroots groups in other Virginia Congressional Districts with less progressive representation challenge the status quo looking toward the November 2018 elections.

If the elections in Virginia in 2017 have been any indication, this year is gearing up to be an exciting one for Arlington activists.

Clara Bridges is an Arlington resident and a member of multiple local activist groups. She works as a software architect for an Arlington based company.

END_OF_DOCUMENT_TOKEN_TO_BE_REPLACED

More Stories
Peter’s Take: Virginia Medicaid Expansion – Let’s Make a DealThe Right Note: Time for the County Board to Step Up on Metro