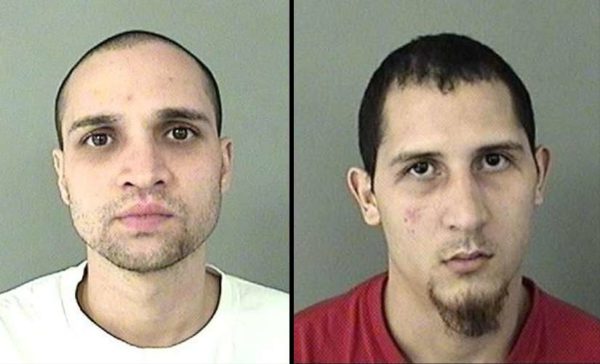 Citizen tipsters were rewarded with $650 for helping the Arlington County Police Department track down two men suspected of armed robbery in 2016.

Police arrested Jorgito Cruz, 37, of Alexandria and Alexander Ruiz, 21, of Puerto Rico for trying to rob Sacramento Jewelers on the 2700 block of Washington Blvd in Lyon Park just before 5:45 pm. on December 7, 2016.

The pair were armed with guns, and tried to hold an employee hostage before fleeing the scene.

Police were led to the men after tipsters spotted a suspicious vehicle stopped on the Washington Blvd exit of I-395 shortly after the robbery. The tipsters reported seeing a man removing tape from the license plate and throwing something away.

Noting the large police presence in the area, the tipsters copied down the license plate number and contacted police. They were arrested in Fairfax County, south of Alexandria, just before midnight that night.

The tipsters were given the cash reward by Arlington County Crime Solvers, a community program that sponsors a 24-hour confidential tip line — 1-866-411-TIPS (8477) — for individuals to anonymously report potential leads or information. Callers who provide information leading to arrest, the recovery of drugs or stolen property, are eligible for a cash reward of up to $1,000.

“During the commission of their crimes, Jorgito Cruz and Alexander Serpa Ruiz endangered the lives of innocent and hardworking citizens,” said Police Chief Jay Farr said in a statement. “Thanks to the assistance of the witnesses and the diligent investigative work of detectives, two violent offenders have been removed from our streets and will no longer be in a position to cause harm in our community. This case highlights how police and the public can work together to maintain the safety and security of Arlington County.”

Ruiz pled guilty to three counts of robbery and use of a firearm during the commission of a robbery. He was sentenced to six years in prison and 10 years of probation upon release.