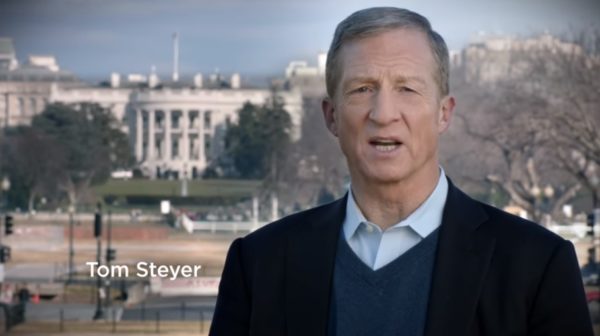 Billionaire Tom Steyer is scheduled to hold a town hall meeting in Arlington tomorrow (March 20) about the “need to impeach” President Donald Trump.

The Tuesday event is part of a nationwide event series that Steyer has launched since Trump took office, in which he makes what he calls “the patriotic case for impeachment.”

Town hall attendees can ask questions during the program as Steyer details how “to support the resistance against Trump’s administration” and calls on Maryland and Virginia lawmakers to act, according to a press release. A second town hall is planned tomorrow in Prince George’s County, Md.

More via a press release:

Arlington residents are heavily concentrated in Virginia’s 8th district, which has a strong Democratic majority. Yet Congressmember Don Beyer voted against impeachment in two separate floor votes despite clear support for impeachment from his constituents. In Prince George’s County, Congressmember Anthony Brown represents Maryland’s deeply Democratic 4th district. Even with calls to action from his constituents, Brown has also voted against impeachment in both floor votes. The town halls will gather local voters demanding explanations from Beyer and Brown on their decisions not to back Trump’s impeachment.

“Donald Trump has put our entire country at risk, and America needs strong leaders who will stand up to him,” said Steyer. “Those who condemn Trump but do nothing to back their words with action are enabling the damage he is inflicting on our people and our democracy. Both Congressmembers Don Beyer and Anthony Brown have repeatedly ignored their constituents’ voices by voting no on impeachment. Since the only thing Beyer and Brown should be contemplating is their constituents’ well-being and best interests, we need to know why. The people deserve representatives who refuse to back down on our shared principles, and we will ensure their voices are heard.”

Steyer launched the Need to Impeach campaign on October 20, 2017 through national television and social media ads. More than 5 million people have since signed on to support the campaign, creating a digital army that several political strategists call one of the most powerful political tools in the Democratic party. So far, six national commercials have aired, reaching more than 2 billion viewers through television and more than 454 million through social media. A seventh commercial — the first in Spanish — will begin airing nationwide this week.

The press release did not note where nor exactly when the events will take place. Attendees are asked to RSVP in order to find out additional event details.

Photo via Need to Impeach