Update at 4:15 p.m. — The Arlington County Police Department has released surveillance images of a man they say broke into the store and then set fire to it.

ACPD is seeking the public's assistance identifying the suspect in these surveillance images. Suspect forced entry into a business and stole merchandise before intentionally setting a fire and fleeing the area on foot. Additional details: https://t.co/NPuejMpaQx @ArlingtonVaFD pic.twitter.com/nL7NBJgMaq

The Arlington County Police Department’s Burglary/Larceny Unit is seeking the public’s assistance in identifying and locating a burglary and arson suspect captured on surveillance camera. At approximately 4:14 a.m. on April 13, the Arlington County Fire Department responded to the report of a structure fire in the 2600 block of Columbia Pike. After extinguishing the fire, the Fire Marshall responded to conduct an investigation and requested the assistance of the Arlington County Police Department. The investigation determined that at approximately 3:22 a.m., the suspect forced entry into the business and stole merchandise before intentionally setting a fire and fleeing the area on foot.

The suspect is described as a heavy-set male, 30-40 years old, approximately 5’10” to 6’0″ tall and weighing 300 pounds. He has a full beard and a bald spot. He was wearing glasses, a light shirt, dark colored jeans and a backpack at the time of the incident. 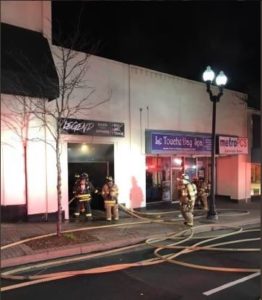 Earlier: A fire was extinguished in the early morning hours this morning (Friday) at a business on Columbia Pike, according to the fire department.

Fourteen fire department units responded to the call on the 2600 block of Columbia Pike just before 4:15 a.m., after a passerby spotted the fire and called 911, according to a department spokesman.

The fire was out by 4:21 a.m. and there were no reported injuries.

The Fire Marshall was on scene and is investigating the cause, according to the spokesman. The fire was at Legend Kicks & Apparel, we’re told, and photos from the scene show firefighters at the storefront.

An online listing for the business indicates that the shoe store recently opened.

The block is also home to Le Touche Beauty Salon and The Salsa Room. The Arlington Cinema and Drafthouse is nearby, on another block.