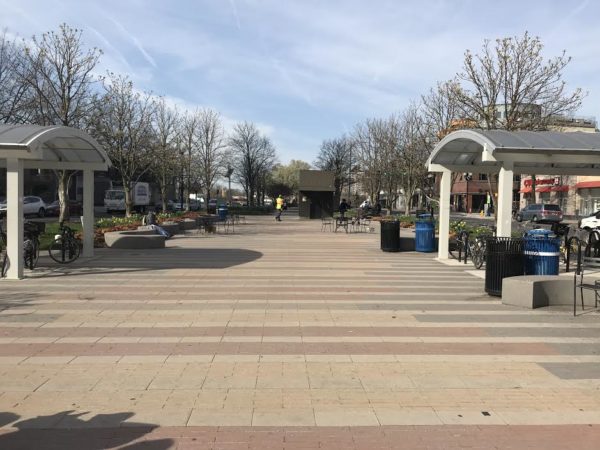 A yarn bomb will be hitting the Clarendon Metro Plaza this week to raise awareness about metastatic breast cancer.

More than 30 trees in the plaza will be covered in colorful yarn from April 20-30, according to Arlington native Ann McLean, the project’s organizer. McLean has been collecting both knitted pieces and monetary donations through her organization called Stitch 4 Stage IV, which was created in November.

More than 200 knitted pieces were donated for the yarn bomb.

“I was really worried that we weren’t going to get enough and it turned out we got more than enough,” she said. “We actually may turn out doing more trees than we thought we were going to do.”

McLean is also using the yarn bomb as a way to celebrate the six-year anniversary of her own diagnosis of metastatic breast cancer. This type of cancer has no cure and the survival rates are grim — around 70 percent of people with it don’t live past 3 years, she said.

“I’m considering this quite an anniversary,” McLean added.

It also sends cancer cells to other parts of the body, and in McLean’s case, it’s in her liver. The cancer is treatable, but not curable, she noted. The yarn bomb is symbolic of the cancer, she said.

“Metastatic breast cancer is like a bomb going off, sending breast cancer debris to other parts of your body — bones, lungs, liver and brain,” McLean wrote in an email.

McLean also got 40 people to sponsor a tree for $100 each and also received other donations, totaling $10,000 raised for the Karen Ribeiro Drug Discovery Research fund at the Inova Schar Cancer Institute.

Knitting was a hobby for McLean when she was a child and she picked it back up when she got her diagnosis. She said it helps her feel “zen,” keeps her busy, and calms any anxiety.

She also got the idea for a yarn bomb when she took a trip to New Zealand and thought the knitting community would support a similar project in Arlington. But the donations have come from all over, including Encinitas, Calif., Palm Harbor, Fla., Rehoboth Beach, Del. and even the United Kingdom.

This will not be Arlington’s first yarn bombing — a group called the Guerrilla Stitch brigade covered Rosslyn in yarn back in 2013.