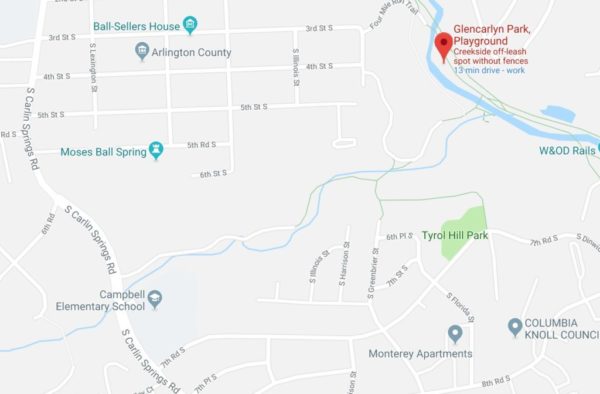 Update at 1:40 p.m. — The Arlington County Police Department has released a description of the man that police say attempted to sexually assault a woman in the Arlington Mill neighborhood this morning.

Police were unable to find the suspect despite an extensive search. More from an ACPD press release:

At approximately 9:05 a.m. on April 20, Arlington County Police were dispatched to the report of a late assault in the 800 block of S. Frederick Street. Upon arrival, it was determined that between 7:30 and 8:00 a.m., an unknown male suspect forced entry into a residence, brandished a knife and attempted to sexually assault the female victim. The victim suffered minor physical injuries and was transported to a local hospital. The suspect fled the area prior to police arrival.

The suspect is described as a black male, 20-30 years old, approximately 5’7″ tall with short cropped hair. He was wearing a black shirt and black jeans at the time of the incident.

Detectives from the Special Victim’s Unit are actively investigating this incident. Responding officers established a perimeter, canvassed the area and spoke with possible witnesses. Arlington County canine units attempted a track of the suspect and the Fairfax County Police Helicopter Unit provided an aerial search with negative results. Officers will continue conducting extra patrols in the area.

Earlier: Police are actively searching for a suspect following an attempted sexual assault this morning.

A man armed with a knife strangled and tried to sexually assault a woman in the Arlington Mill neighborhood, according to scanner traffic. A responding officer reportedly spotted a man matching the description of the suspect, but he was able to flee on foot.

Police officers, a K-9 unit and the Fairfax County Police Department helicopter are now searching the wooded area around Glencarlyn Park for the suspect.

Campbell Elementary School has been secured while the search is in progress.

Suspect is described as a black male, approximately 5’7” tall with short cropped hair. He was wearing a black t-shirt and black jeans at the time of the incident. The investigation is ongoing.

Campbell is on Secure the Building due to police activity in the community. Students are having regular classes and a SRO is present.

The police have been searching a grassy area near this playground. pic.twitter.com/WchzWnRxxJ