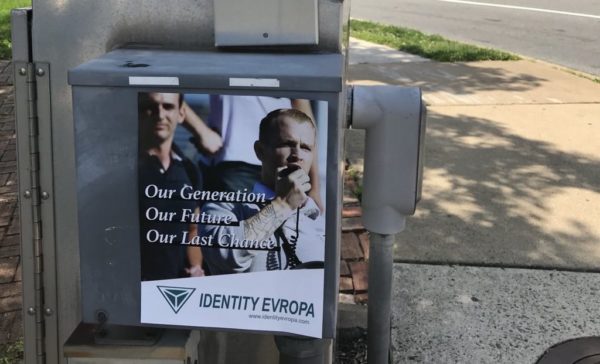 (Updated May 22 at noon) Shana Silver says she was walking along Washington Blvd in Clarendon today (Monday) when she made a disturbing discovery: a flier advertising an Alexandria-based white supremacist group.

She snapped a photo of the slip of paper, distributed by the group Identity Evropa, before promptly taking it down. The flier shows several tattooed white men with the text “Our Generation, Our Future, Our Last Chance” overlaid over the image, and Silver says it was posted near the pedestrian crossing to reach Northside Social.

“I know what neo-Nazi, white supremacist propaganda is when I see it,” Silver told ARLnow. “As a Jewish woman, I can’t let that go.”

One likes to think their community is a safe & inclusive home for all. Then they find Neo-Nazi recruitment signs posted.@ArlingtonVaPD @ARLnowDOTcom , found this on the corner of Washington Blvd. and Wilson this afternoon (I’ve already trashed it) and I’m sure there are more. pic.twitter.com/UD055reotz

Silver, who works for a D.C. nonprofit focused on battling systemic racism in the region, suspects that the flier must have been new, as it had plainly not been soaked by the rain plaguing Arlington for the last week. She says she hasn’t spotted other, similar fliers around Arlington, but she plans to take down any others she might encounter.

“It’s not surprising, but it is very upsetting and disappointing,” Silver said. “It’s really quite sad. You see it happening all over the country and all over the world, this resurgence of white supremacists. They feel like they’ve been emboldened in this political climate.”

Sam Harrington, a spokesman for Identity Evropa, wrote in an email that the group is “a movement for European Americans seeking to preserve our identity and restore the American nation.”

“People of European heritage are being replaced as a result of mass immigration and globalization, and we shouldn’t be expected to find this desirable,” Harrington wrote.

The group argues on its website that it does not believe in white supremacy, but both the Southern Poverty Law Center and the Anti-Defamation League categorize the organization as a white supremacist group. The SPLC also notes that one of its founders helped plan the infamous “Unite the Right” rally in Charlottesville last summer, marked by the death of a protester, allegedly at the hands of a man with white supremacist beliefs.

Harrington would not say whether the group has any members in Arlington.

“We’re a nationwide organization, and our members participate in peaceful activism and fliering everywhere,” Harrington wrote.

Arlington County police spokeswoman Ashley Savage says her department has not received any reports about the fliers, dating back to Friday (May 18).