Sponsored by Monday Properties and written by ARLnow.com, Startup Monday is a weekly column that profiles Arlington-based startups and their founders, plus other local technology happenings. The Ground Floor, Monday’s office space for young companies in Rosslyn, features a 5,000-square-foot common area that includes a kitchen, lounge area, collaborative meeting spaces, and a stage for formal presentations.

Less than two years ago, Politico alumni Jim VandeHei, Mike Allen and Roy Schwartz struck out and launched Axios, a media startup with a single goal: to “help people get smarter, faster.”

Since then, the company has grown so rapidly that it needed to leave behind its old office space at the MakeOffice coworking space at 3100 Clarendon Boulevard. But Axios isn’t going far — on May 30, the company moved in to new digs on the 13th floor of the same office building, on a 10-year lease. 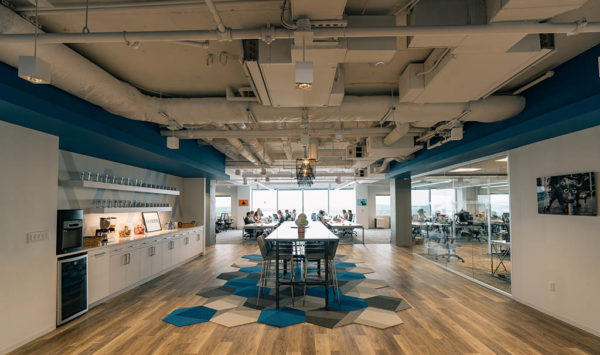 Downstairs, they were “bursting at the seams,” Schwartz said. “I don’t think we had a free chair.”

The company’s Clarendon headquarters currently houses around 85 employees, of over 115 total. By the end of 2018, Axios aims to grow its staff to 150 across its Clarendon, New York and San Francisco offices.

Schwartz believes the 13th floor space will allow the startup to grow in a location that is the “physical manifestation of our principles.”

From conference rooms with glass walls labeled with Axios catch phrases (“Axioms”) like “Be Smart” and “Between the Lines,” to wood tables built in Wisconsin by VandeHei’s brother, the office is full of personal touches.

“We wanted an environment… where everyone felt that they belong,” Schwartz said.

The company’s work to build an inclusive culture is evident within and beyond its workspace, which includes a gender-neutral restroom and glass rooms to promote transparency. Placards on shared desks include names, titles, and short “why I matter” statements. And when new employees start, they input their pronouns on collaboration software Slack, according to company spokeswoman Megan Swiatkowski.

Employees have plenty of spaces to work, take breaks or perhaps do both: for instance, in a conference room with a table that can be converted for impromptu ping pong games or on treadmills that double as desks. 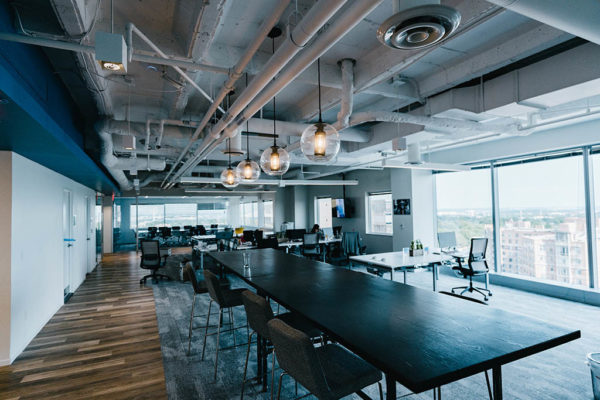 An area dubbed “Relaxios” features picturesque views of Arlington, and windows in the office’s kitchen capture D.C. landmarks like the Washington Monument. Instead of using the Relaxios space for something like an executive’s office, Axios has “democratized all the views,” Schwartz said.

Near the entrance, “Snaxios” offers a wide selection of food, from Goldfish to fruit and candy.

With interns starting today and the “People Operations” team reviewing applications for a number of open positions, Axios isn’t looking to slow down anytime soon.

“The space allows us to have the freedom to grow,” Schwartz said.

Check out more photos of Axios’s new space after the jump: