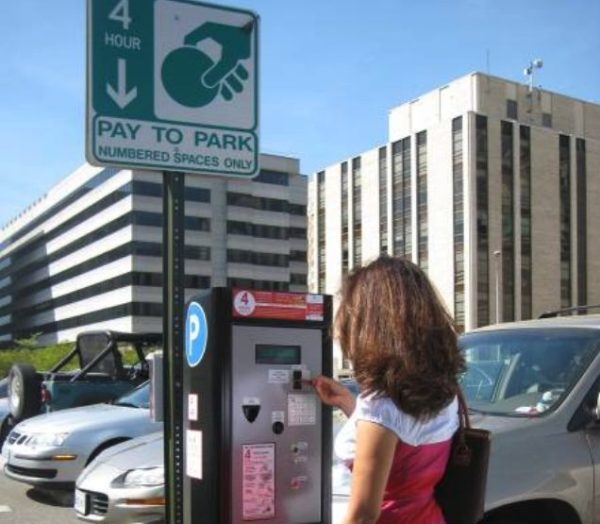 Arlington could someday start adjusting its on-street parking prices based on demand, though the county remains years away from moving to such a system.

While the county already charges by the hour on many streets in commercial corridors, and recently bumped up its rates and expanded parking enforcement hours, Arlington staffers are hoping to make a more radical adjustment in the future.

The County Board recently gave staff the green light to apply for $6.1 million in state funding to pay for the bulk of a new “demand-based parking” system. That will also include the “installation of hardware and software to monitor and display occupancy, turnover, and parked duration information,” according to a staff report prepared for the Board.

Katie O’Brien, a spokeswoman for the county’s Department of Environmental Services, told ARLnow that such a system could change “parking meter prices by time of day and location based on market demand” in order to better manage parking availability in busy neighborhoods.

“The price would be determined by parking demand and popularity for certain blocks which means some blocks could actually become cheaper than they are now; others could become more expensive,” O’Brien wrote in an email. “Prices would change periodically; not minute-by-minute or hour by hour.”

She points out that cities like Seattle, San Francisco and Los Angeles have experimented with this sort of system, in addition to Arlington neighbors like D.C. and Baltimore. In general, O’Brien says “price changes have occurred every few months,” so as not to make things too jarring for drivers.

“Similar projects have shown reductions in congestion because it becomes easier to find on-street parking and there’s less circling,” O’Brien wrote. “If funded, the project would also create real-time parking occupancy data that software developers could include in popular navigation apps.”

She also noted that the county has weighed experimenting with demand-based parking pricing since including a mention of the system in its 2009 update of Arlington’s “Master Transportation Plan.” The document recommends that the county use the system to move toward ensuring an 85 percent “on-street occupancy rate” on busy blocks, particularly those in business districts and Metro corridors.

However, O’Brien adds that the county isn’t likely to make such a change for several years yet.

The county is applying for “Smart Scale” funding for the project, which is handed out by the Commonwealth Transportation Board for improvements around the state. The money Arlington is after wouldn’t become available until fiscal year 2024, and even then, the county has to beat out other projects for that funding in the first place.

Should the county win the money, O’Brien says officials could then “implement performance pricing in a pilot area to test it before moving forward with wider implementation.”