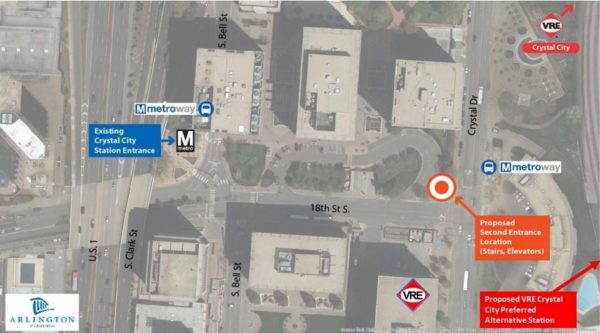 (Updated at 10 a.m.) Arlington is getting ready to seek nearly $78 million in state transportation funding to build a second entrance at the Crystal City Metro station.

The County Board is considering submitting the project for “Smart Scale” funding, money handed out by the Commonwealth Transportation Board for big-ticket projects around the state. If approved, Arlington would have the money it needs to add an eastern entrance to the station at the northwest corner of the intersection of Crystal Drive and 18th Street S., perhaps by sometime in 2024.

The county has spent years studying the prospect of a second entrance to ease access to the Crystal City station, particularly as planners project substantial increases in housing development in the area over the next few decades, with or without Amazon’s potential arrival. The project would also include two street-level elevators and a new underground passageway and mezzanine to reach the Metro platform.

Yet the county has hit some roadblocks when it comes to finding funding for the $91 million project.

Arlington’s recent budget woes, brought on by declining commercial tax revenues and new funding obligations for Metro service, means that the county will need to rely on outside funding for the second entrance. The county expected to get most of that money from the Northern Virginia Transportation Authority, a regional body that funds major transportation improvements.

But the NVTA recently told the county that it can only chip in about $5 million towards design work for the project, as the group adjusts its own funding plans after losing out on tens of millions in annual revenue as a result of a deal to provide dedicated funding to Metro.

That forced Arlington officials to turn to the statewide “Smart Scale” program to for funding, an outcome local lawmakers predicted as a result of the NVTA losing out on money as part of the Metro deal. The county is similarly concerned about how it might pay for second entrances at the Ballston and East Falls Church stations in the coming years due to these same factors, but officials only chose to submit the Crystal City project for “Smart Scale” money.

State transportation officials will evaluate the Crystal City entrance against other projects across the state, and award funding based on factors like how much congestion they will relieve and how much economic development they’ll spur. Should Arlington win the full $78 million it’s asking for, county officials plan to use the NVTA money and some local tax revenue to fund the remainder of the project’s cost, according to a staff report.

The county also plans to submit three more projects, with a total cost of roughly $10.1 million, for “Smart Scale” funding.

Those include the expansion of Transitway service in the Crystal City area, the installation of new equipment and software to create a demand-based pricing system for county parking meters and the procurement of software to better manage Arlington Transit (ART) bus service.

More on the parking meter proposal:

The County Board will formally vote to endorse these “Smart Scale” applications at its meeting this Saturday (July 14).