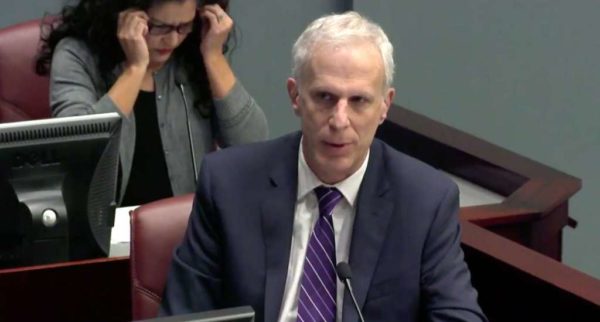 With Metro expenses climbing and tax revenue growth slowing, the county’s top executive is calling for a rollback in new construction on some transportation improvements and other neighborhood infrastructure projects.

Arlington County Manager Mark Schwartz unveiled his proposed Capital Improvement Plan in a presentation to the County Board Tuesday (May 22), detailing the $2.7 billion in construction projects he wants to see Arlington take on over the next 10 years, and he did not have much in the way of good news for county officials.

Schwartz’s proposal does not call for the county to stop work on any existing construction efforts, or cancel some of Arlington’s major new facilities projects. For instance, Schwartz noted that his CIP still has full funding for things like the Long Bridge Park Aquatics and Fitness Center, the new Lubber Run Community Center and a replacement for Fire Station 8 on Lee Highway.

However, he believes the roughly $90 million in additional bond funding the county will need to put towards Metro, under the terms of the dedicated funding deal hammered out by state lawmakers earlier this year, will seriously squeeze Arlington’s ability to take on major new projects over the next 10 years. When combined with rising school costs, and the Metro funding deal’s cuts to regional transportation funding available through the Northern Virginia Transportation Authority, Schwartz feels there’s every reason to believe Arlington will be under some serious budget pressure for the next few years.

“This is not one of the better CIPs I’ve ever worked on,” Schwartz told reporters Tuesday. “You’re not going to find anything new in here… but I’ve proposed a CIP that sticks to what we’re committed to doing. Even still, I think there are things we should be doing that will have to be postponed.”

One of the largest changes Schwartz is proposing is to the county’s Neighborhood Conservation program, which funds modest community improvements like sidewalks, signs and landscaping. The county originally planned to spend $60 million on the program over the next 10 years; the new CIP would slash that to $36 million.

“We’ll be able to catch up on our backlog of projects already in the pipeline, and do some planning for future programs, but not much else,” said Michelle Cowan, the deputy county manager.

Schwartz’s plan also does not include any money for buying land for new parks; the county’s last CIP two years ago included $15 million for that purpose. However, his proposal does include $18 million for the first phase of redevelopment at Jennie Dean Park in Nauck, after the County Board just approved a new policy framework for the Four Mile Run valley.

Transportation projects on “arterial roads,” such as S. Walter Reed Drive or S. George Mason Drive, could also get pushed back under Schwartz’s proposal. He noted that the county still will devote $91 million over 10 years to improvements along Columbia Pike, largely aimed at beefing up bus service in the corridor to help compensate for the death of the controversial streetcar, but he also emphasized that Arlington’s “number one priority” with its transportation money is meeting its Metro obligation.

Even still, Schwartz echoed the warning by some county leaders that the county will likely have to abandon or severely delay plans to add second entrances at the Crystal City, Ballston and East Falls Church Metro stations. The county expected to use regional funds from the Northern Virginia Transportation Authority to pay for the combined $230 million in costs — now, NVTA leaders warn that they’ll likely have less money to dole out under a hotly debated provision of the Metro funding deal, and Schwartz told officials that he “can’t tell you a way to come up with the funds for those” projects without NVTA money.

Schwartz added that the CIP does include about $3 million for development at the Buck property along N. Quincy Street and $1.5 million for improvements at parcels along Carlin Springs Road. However, Schwartz noted that the county was originally planning on moving forward with ambitious new projects at those sites, which it will now largely have to put on hold.

In all, the county’s financial picture is so strained that Schwartz believes Arlington’s county government and school system are spending about as much on debt payments each year as they can “in good conscience.” That will likely come as bad news to School Board members, who have been hoping the county would help the school system take on a bit more debt to fund expensive high school projects at the Arlington Career Center and Education Center sites.

“If we’re going to put more money toward schools, something has to go away,” Schwartz said. “And I’d be hard pressed to figure out what it would be.”

Board member John Vihstadt echoed that point once Schwartz’s presentation was finished, even as he noted that the lack of money for new park land was “very disappointing.”

Schwartz and some Board members expressed some optimism that the 2019 elections could change the outlook in the General Assembly, particularly as some Northern Virginia Democrats agitate for a chance to re-do the Metro funding deal that’s so squeezed localities.

But, for now, the county is stuck with a gloomy financial forecast. Schwartz even concluded his presentation by noting that he expects to propose tax rate increases in his next budget, an outcome the Board managed to avoid this year.

The Board will now hold a series of work sessions on the CIP over the next month, and is set to approve it by July 14.