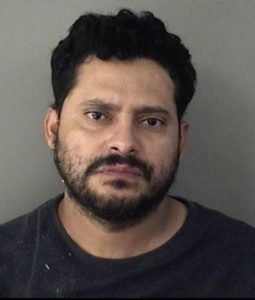 Arlington police arrested a man for peering into a window and trying to force it open near a Lyon Park apartment complex Tuesday night (July 24).

County police say they received a call about a man looking into the window of a home along the 100 block of N. Wayne Street just after midnight Tuesday. The block is home to the Washington and Lee Apartments, just off Washington Blvd.

Two people tried to confront the man, but he fled the scene on foot. Officers subsequently apprehended 33-year-old Andelino Carrillo Najarro, and charged him with peeping into a dwelling and drunk in public.

Full details on the incident from a county crime report:

PEEPING, 2018-07240004, 100 block of N. Wayne Street. At approximately 12:10 a.m. on July 24, police were dispatched to the report of peeping. Upon arrival, it was determined that a witness observed an unknown male suspect looking into the window of a residence and attempting to open the window. After being confronted by the witness and victim, the suspect attempted to flee the scene on foot prior to police arrival. Andelino Carrillo Najarro, 33, of Arlington, VA, was arrested and charged with Peeping and Drunk in Public. He was held on no bond.