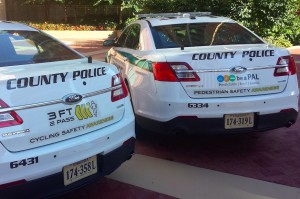 County police say a man was riding his bike near the intersection of Patrick Henry Drive and Wilson Blvd last Wednesday night (Aug. 1), when he stopped briefly and was approached by a man brandishing a knife.

The man demanded that the bicyclist hand over his belongings and his bike. Once he did so, the man rode off on the bike before police arrived. Police say their investigation is still ongoing.

ROBBERY, 2018-08010255, Patrick Henry Drive at Wilson Boulevard. At approximately 8:53 p.m. on August 1, police were dispatched to the report of a robbery at knife point. Upon arrival, it was determined that approximately 10 minutes prior, the victim was riding his bike in the area and stopped briefly, when he was approached from behind by an unknown suspect who brandished a knife and demanded his bike and personal belongings. The suspect then stole the victim’s belongings and bike and fled on the bike prior to police arrival. Arriving officers canvased the area with negative results. The suspect is described as a Hispanic male, 20-25 years old, approximately 5’4″-5’6″ tall, with a goatee and black hair that was slightly above shoulder length, wearing a black tank top, red shorts and white sneakers. The investigation is ongoing.

Here are the rest of the past week’s crime report highlights, including some we’ve already reported:

BURGLARY (late), 2018-08070218, 1200 block of S. Forest Drive. At approximately 6:10 p.m. on August 7, police were dispatched to the late report of a burglary. Upon arrival, it was determined that at approximately 3:00 a.m., an unknown suspect entered a garage and stole items of value. The suspect is described as a light skinned black male with a thin build, 5’11” to 6’0″ tall with slight facial hair. He was wearing a sweatshirt and hat at the time of the incident. The investigation is ongoing.

SUSPICIOUS CIRCUMSTANCES, 2018-08070213, 4600 block of S. Four Mile Run Drive. At approximately 6:10 p.m on August 7, police were dispatched to the report of possible shots fired. Upon arrival, it was determined that a witness was walking in the area when he heard the glass from a vehicle window break. Arriving officers located a parked vehicle with a shattered window. No physical evidence of a shooting was located at the scene and a canvas of the area resulted in no additional witnesses. No injuries were reported.

BURGLARY, 2018-08060187, 2200 block of 2nd Street N. At approximately 6:25 p.m. on August 6, police were dispatched to the report of a breaking and entering. Upon arrival, it was determined that between 6:45 a.m. and 5:00 p.m., an unknown suspect(s) forced entry into a residence and stole cash. There is no suspect description. The investigation is ongoing.

BRANDISHING, 2018-08050187, 4100 block of 4th Street N. At approximately 7:51 p.m. on August 5, police were dispatched to a brandishing. Upon arrival, it was determined that two suspects entered the victim’s residence and brandished a firearm. One suspect was known to the victim. The suspects fled the scene prior to police arrival. There were no injuries reported and nothing was taken from the victim or residence during the incident. Suspect One is described as a male, 5’7″ tall, approximately 170 lbs, with long black dreadlocks. He was wearing a black t-shirt and jeans. Suspect Two is described as a Hispanic male, 6’0″ tall, approximately 170 lbs, with short black hair. He was wearing a black shirt, pants and shoes at the time of the incident. The investigation is ongoing.

ROBBERY (late), 2018-08030191, 5000 block of Chesterfield Road. At approximately 2:32 p.m. on August 3, police were dispatched to the late report of an assault. Upon arrival, it was determined that at approximately 11:00 p.m. on August 2, the victim was walking to a store when he was approached by two suspects who asked for a dollar. When the victim refused, one suspect brandished a firearm and assaulted the victim before stealing his personal property. The suspects are described as black men with long dreadlocks, approximately 5’7″, both wearing dark jeans and white tank tops. The investigation is ongoing.

BURGLARY, 2018-08030239, 500 block of N. Frederick Street. At approximately 6:30 p.m. on August 3, police were dispatched to the late report of a breaking and entering. Upon arrival, it was determined that between 9:00 p.m. on August 2 and 6:15 p.m. on August 3, an unknown suspect(s) gained entry to a residence and stole items of value. There is no suspect(s) description. The investigation is ongoing.

‘Tis the season to get tipsy with cozy cocktails and two-buck beers. B Live, the live music venue and restaurant in the old Whitlow’s on Wilson space at 2854 Wilson…