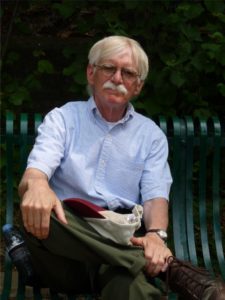 Updated 3:45 “Why am I doing this?” It was a lovely summer morning and I could be watching my grandson’s soccer game, or finishing the crossword, or dividing perennials. Instead, I was knocking on the doors of 35 strangers in Arlington.

The homeowner looked at me with the familiar impatient frown. But it (thankfully) morphed into a wry grin as she saw this thin, white-haired, unprepossessing guy. I could see the speech bubble above her head –“No clue who this is, but he seems harmless.”

I introduced myself as a volunteer for Arlington Democrats. I asked whether she was registered to vote, and was likely to vote in the upcoming election. For a likely Democratic voter, I simply highlighted the importance of every vote–a message made more credible following the one-vote loss of the Democratic candidate for the House of Delegates in Newport News in 2017 and the repercussions of that loss on the evenly-divided House. I was prepared to engage on issues, but Saturday morning conversations with the uninvited typically hold little appeal — for either person. I thanked her and went on to the next door. Thirty-two doors to go.

So why do we canvass, particularly those of us who guard our own privacy, dislike arguments and are by temperament very reserved?

The Practical Reason: At bottom, we do it because we believe in the party’s platform and values and have the time to, perhaps, nudge turnout a tiny bit. Door-to-door canvassing is generally believed to increase voter turnout among frequent voters–at least marginally. Turnout in non-presidential elections is particularly important for Democrats. And Arlington Democratic turnout has become critical in statewide races.

Where Sen. Warner and then-Gov. McAuliffe won with narrow statewide voting totals (a 1% margin for Warner and 2.5% margin for McAuliffe), Arlington voters provided winning margins of more than 40% for both candidates–enough, together with other northern Virginia jurisdictions, to offset deep red voting elsewhere. Although Sen. Tim Kaine’s re-election race this year is unlikely to be close, turnout can help with down ballot candidates, proposed constitutional amendments, and bond referenda.

The Real Reason: But canvassing these days is, at least for me, far more important as an outlet for outrage at the flood of voter suppression measures championed by Republican legislators in Richmond. Virginia’s photo ID law–among the strictest in the country–purports to fight an epidemic of voter fraud but is viewed, by all but the most credulous, as a tactic to disenfranchise eligible Democratic voters.

Indeed, Republican legislators have fought hard for legislation requiring any voter submitting an application for an absentee ballot by mail to submit a photo ID. Such a law seems absurd because the registrar would have no corporeal being standing before him to compare to the photograph. The absurdity did nothing, however, to discourage the Virginia House and Senate from passing the bill on party line votes, although the Republicans were unable to override then-Gov. McAuliffe’s veto.

Virginia also remains one of four states to permanently disenfranchise citizens with past felony convictions, unless the Governor grants relief. Such laws have their roots in Virginia’s Reconstruction Era efforts to deny civil rights to newly freed slaves. In most states, convicted felons regain the right to vote upon release from prison or at thereafter.

Although then-Gov. McAuliffe expanded upon the efforts of prior governors by issuing an Executive Order restoring voting rights to convicted felons upon completion of their sentences, the order was subject to a successful Republican legal challenge. Currently, the Governor has begun to issue voting restoration orders on an individual basis, over the strong objections of Republican legislators.

In the face of efforts to dampen voting rights, canvassing represents, for many of us, an individual act of defiance against the dysfunctional ugliness of contemporary politics and Republican efforts to preserve and extend Jim Crow-era restrictions on state voting rights. However time-consuming and awkward it can seem, canvassing is the very stuff of democracy. In these days when a governing national party sows discord and incites contempt for government and its institutions, canvassing is not an antidote to cynicism and despair. But it can be, even for the shy, a weekly tonic.

John F. Seymour is a long-time resident of Arlington, Virginia.