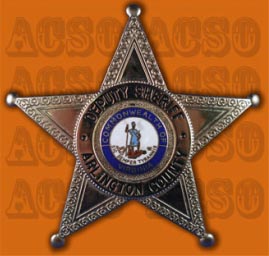 An Arlington man is now behind bars after he allegedly struck a sheriff’s deputy and was subsequently subdued with a Taser.

County sheriff’s office spokeswoman Maj. Susie Doyel says deputies were working to evict 53-year-old Vincent Moody from his home along the 1000 block of S. Queen Street when he “became combative.” Moody then “struck a deputy in the face” and was tasered by the deputies, Doyel said.

He’s now facing charges of obstruction and assault on a law enforcement officer, with a hearing in Arlington General District Court set for Oct. 24.

Moody is being held at the county detention center without bond.

More highlights from the past week of county crime reports, including some we’ve already reported, are below.

BURGLARY (late), 2018-09250202, 2500 block of S. Lynn Street. At approximately 6:07 p.m. on September 25, police responded to the report of a burglary. Upon arrival, it was determined that between 4:45 p.m. on September 24 and 5:00 p.m. on September 25, an unknown suspect(s) gained entry to a residence and stole an undisclosed amount of cash. There is no suspect description(s). The investigation is ongoing.

MALICIOUS WOUNDING, 2018-09200132, 2000 block of S. Kenmore Street. At approximately 2:03 p.m. on September 20, police were dispatched to the report of trouble unknown. Upon arrival, it was determined that one victim became engaged in a verbal dispute with two suspects inside a business. The victim then exited the business and got into a vehicle with two additional victims. As the victims began to drive away, the suspects approached the vehicle and the dispute escalated. One suspect brandished a firearm and shot at the vehicle occupied by the victims. The suspects then fled the scene on foot. One of the victims suffered minor injuries and was treated on-scene by medics. The investigation is ongoing.