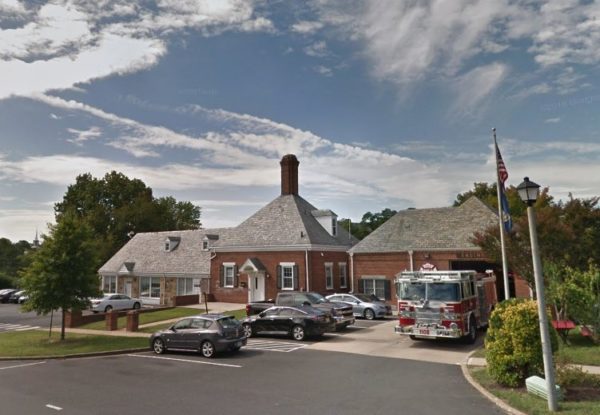 Fire Station 7 in Fairlington will soon shut down temporarily and its firefighters will relocate elsewhere, due to some structural concerns at the property.

Arlington County’s fire department announced the move yesterday (Thursday), reassuring Fairlington and other South Arlington residents that other firefighters near the station (located at 3116 S. Abingdon Street) will continue serving the area during the closure.

The fire department says the trouble stems from the “apparatus bay floor” of the station, where fire engines are housed inside the building. Whenever firefighters would pull an engine into or out of the station, the county says crews heard noises that convinced them to undertake an engineering investigation — particularly because some of the crew’s living quarters are located directly beneath the area in question.

That closer look at the concrete convinced the fire department to move its crews elsewhere, for now.

“First, the floor was built many decades ago and was not designed to handle the weight of modern fire engines, which has almost doubled since the station was built,” the fire department wrote in a blog post. “Second, with the additional weight, engineers found that the steel and the concrete structures of the flooring were no longer working in unison to support the load. The noise the crews heard was the concrete and steel in the floor rubbing against one another as they were flexing at different rates.”

With the onset of some colder temperatures, firefighters don’t feel comfortable simply storing fire engines outside, so crews working out of Fire Station 7 will move to Fire Station 4 in Clarendon (3121 10th Street N.) as work continues.

The fire department expects it will need a month or two to complete a “more thorough inspection of the concrete slab,” and then expects to identify some “possible fixes” for the station.

Until then, the county expects to rely on Fire Station 9 (1900 S. Walter Reed Drive), two stations in Alexandria and one in Bailey’s Crossroads to serve the area.

“The fire department is committed to providing high-quality and dependable service to Arlington residents,” Acting ACFD Fire Chief Joseph Reshetar wrote in a statement. “The proximity of Fire Station 9 and our mutual aid agreements with Alexandria and Fairfax County will ensure that Fairlington continues to receive thorough fire and Emergency Medical Services (EMS) coverage.”

Crews at Fire Station 7 will officially move out this coming Tuesday (Oct. 30).