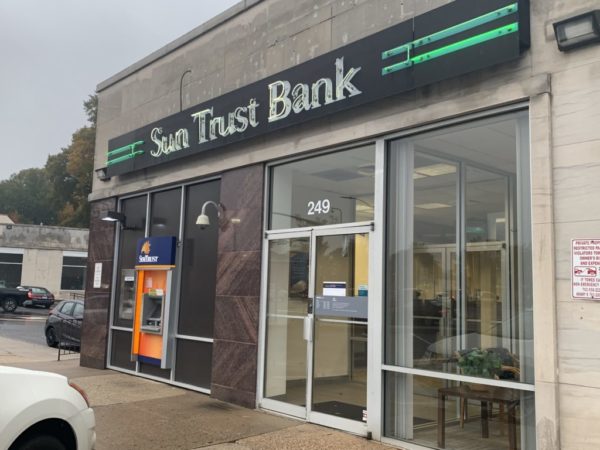 SunTrust Bank will close its branch at 249 N. Glebe Road on Feb. 5.

“The decision to close a branch is made after careful study and analysis,” Hugh Suhr, a spokesman for SunTrust, told ARLnow, adding that market growth, real estate arrangements and transaction volumes are some of the factors considered.

The bank began notifying clients last week, and their accounts will be transferred to either the Arlington Gateway branch at 901 N. Glebe Road or the South Arlington branch at 3108 Columbia Pike, unless clients specify a different location, Suhr said.

“SunTrust, like all banking companies, must constantly refine its branch network to meet the changing needs and transaction patterns of clients, as well as taking into account their increasing usage of newer delivery channels such as internet banking and mobile banking,” Suhr said.

In May, SunTrust, which is based in Atlanta, was hit with a massive data breach that compromised 1.5 million customer accounts.

A Subway sandwich shop next door at 243 N. Glebe Road closed earlier this year. The owner decided to shut it down in April in order to focus on another Subway location nearby that is still open, a spokesperson for the restaurant told ARLnow.