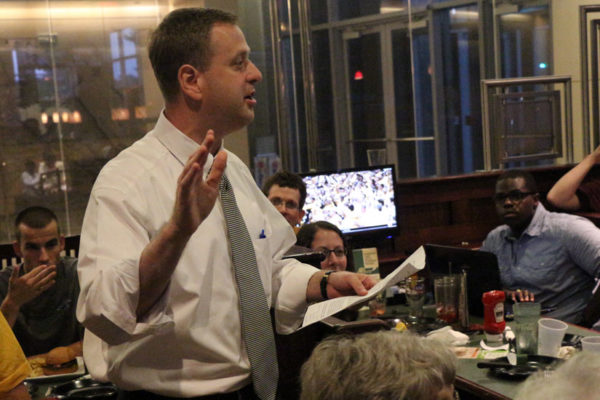 Del. Patrick Hope (D-47th District) is swearing off campaign contributions from Dominion Energy and calling on his fellow Democrats to do the same, becoming the latest in a line of state lawmakers to reject money from one of Virginia’s only regulated monopolies.

Hope announced at his annual pancake breakfast Saturday (Jan. 5) that he’ll now stop accepting campaign cash from the electric utility, according to a video posted by the Democratic blog Blue Virginia. Hope has accepted $9,500 from Dominion since he was first elected back in 2009, but decided to stop doing so as he gears up to run for a sixth term in office this fall.

“I’ve heard from a lot of my constituents that the perception that you’re taking money is influencing your vote, whether it’s true or not,” Hope told attendees. “I can’t give enough speeches to convince my constituents that I’m voting not because they gave me a check, but because it’s the right thing to do. And I’m tired of making that speech over and over.”

Hope added that “every single Democrat that’s running for office should make that commitment” to refuse Dominion dollars, and many around the state already have.

Dominion has long been one of the top political donors in the whole state, yet politicians of both parties have increasingly argued that members of the General Assembly shouldn’t accept money from a company they’re charged with regulating — just last year, lawmakers oversaw an extensive rewrite of the state’s regulatory authority over electric utilities like Dominion.

The activist group Activate Virginia brought a focus to the issue during the last round of state elections in 2017, eliciting a pledge from dozens of Democrats running for the House of Delegates to refuse the company’s money.

Some of Arlington’s legislative delegation also followed suit, including Dels. Mark Levine (D-45th District), Alfonso Lopez (D-49th District) and Rip Sullivan (D-48th District). Lopez, like Hope, did previously accept Dominion contributions in the past, taking in about $4,500 since he was first elected in 2012.

The county’s three state senators, however, all still take thousands from Dominion. Sen. Janet Howell (D-32nd District) has accepted $50,000 from the company over the course of her long career, while Sen. Barbara Favola (D-31st District) has taken in $9,500 and Sen. Adam Ebbin (D-30th District) has pulled in $12,500. Local Democratic activist Nicole Merlene even recently launched a primary challenge against Favola, calling for a ban on contributions from state-regulated utilities as part of her campaign.

But Hope sees a sea change coming in Virginia politics on the issue. Attorney General Mark Herring became one of the most senior Democrats in the state to refuse Dominion cash when he announced he wouldn’t accept any of the company’s money as he ramps up a campaign for governor for the 2021 cycle, and Hope “wholeheartedly” endorsed the former Loudoun state senator’s nascent bid to succeed Gov. Ralph Northam.

“I’m going to take the same commitment he made because I don’t want him to be the only one there making it,” Hope said, with Herring in attendance.

PREDICTION: there will never be another statewide Democratic candidate for office that accepts money from Dominion. https://t.co/kjjgYfJoAL

Northam himself rolled out a series of campaign finance reform proposals today (Monday), officially announcing his support for a ban on all corporate campaign contributions. Unlike 2017 primary rival Tom Perriello, Northam accepted nearly $73,000 in contributions from Dominion over the course of the gubernatorial campaign, but he pledged to push a ban on corporate cash once he was elected.

However, unless Democrats win an uphill battle in convincing the Republicans controlling both chambers of the General Assembly to embrace such a change, Northam plans to continue accepting such donations for his political action committee.

“Until we’re able to do that, I will continue to operate in the existing landscape,” Northam told reporters.