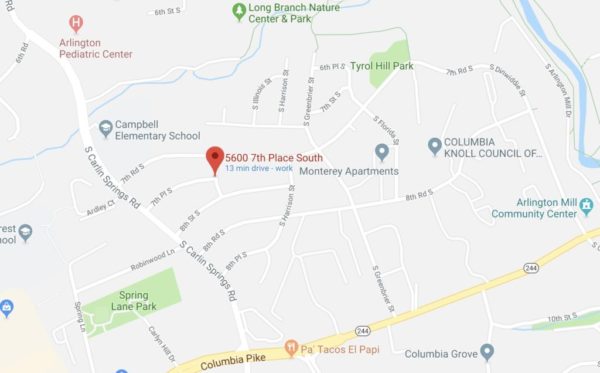 Firefighters extinguished a garage fire that spread to an adjacent house in the Arlington Mill neighborhood Sunday afternoon.

The fire broke out around 2:30 p.m. on the 5600 block of 7th Place S. Photos from the scene, below, show significant flames and smoke visible from the street.

The fire was reported out around 3 p.m. and there were no injuries, according to the Arlington County Fire Department. Fire marshals are now investigating the cause of the blaze.

#Breaking: Units on scene 5600 block of 7th Pl S with working fire in garage of single family home with extension to adjacent structure. Units putting water on the fire and conducting searches. pic.twitter.com/smDye0pMJb

Fire in both structures is out. All searches are negative. Units finishing overhaul & ventilation of structures & starting to clean up. No injuries. Fire Marshals investigating. Expect congestion in the area for at least another 30-45 minutes. pic.twitter.com/NGeTJE7exZ