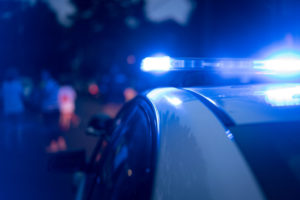 (Updated on 3/19/2019) Arlington police are searching for two men they say were involved in a knife attack early Friday morning.

Police say someone approached officers patrolling on the 2900 block of Clarendon Boulevard — the same block as the Cheesecake Factory — with a knife wound on their neck.

ACPD spokeswoman Ashley Savage told ARLnow that as of Monday at 4:45 p.m. the investigation is still ongoing and the suspects had not been arrested.

The attack happened just after 2 a.m. Friday after the victim asked their friends to stop talking to two men as he or she wanted to leave, Savage said. The two men then began following the group and “following a verbal altercation, one suspect produced a blade and struck the victim in the neck,” according to police.

The victim reportedly suffered a superficial laceration to the neck which did not require medical aid.

Police described the suspects as two 5’8″ white men — one balding, tattooed, and weighing 140 lbs, and the other with “an athletic build” who wore a black T-shirt and jeans during the incident.

If apprehended, the suspect who wielded the knife could be charged with malicious wounding, which under Virginia code carries a penalty of between 5 and 20 years behind bars and a fine of up to $100,000.

MALICIOUS WOUNDING, 2019-03150030, 2900 block of Clarendon Boulevard. At approximately 2:09 a.m. on March 15, officers on routine patrol were approached by a victim suffering from a superficial laceration to the neck. The victim did not require medical attention. Upon investigation, it was determined that the victim’s friends were speaking with two unknown males when the victim approached them and told them it was time to go. The unknown male suspects began following the group and following a verbal altercation, one suspect produced a blade and struck the victim in the neck. The suspects fled the scene prior to police notification. Suspect 1 is described as a white male, bald with tattoos, between 5’8″ – 5’9″ tall and approximately 140 lbs. Suspect 2 is described as a white male, approximately 5’8″ with an athletic build. He was wearing a short sleeve black shirt and light colored jeans at the time of the incident. The investigation is ongoing.