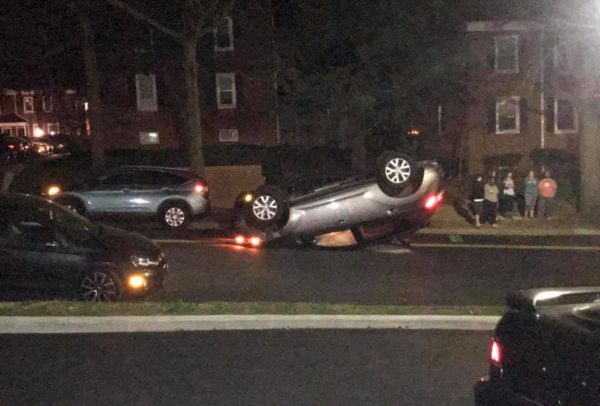 Police are trying to locate a group of alleged car thieves they say flipped a stolen car before attempting to steal others in the Fairlington neighborhood.

Around 11:30 p.m. Saturday night police arrived at the scene of a flipped car on the 4800 block of 28th Street S, according to a crime report posted today. Officers discovered that the vehicle was a sedan stolen from D.C. and determined that its passengers broke into several other cars in the area while trying to flee the crash scene.

The suspects allegedly stole one car, a Silver 2016 Kia Optima, from the neighborhood after flipping their own and attempted to break into several other vehicles, ACPD spokeswoman Ashley Savage told ARLnow.

Residents posted pictures of the scene on Facebook. One picture shows a log sitting in the passenger seat of one of the cars, wood chips and glass from the broken window strewn across the center console.

“Approximately four vehicles were tampered with,” confirmed Savage. “The driver’s side windows of two vehicles were smashed and a log was located at the scene.”

MOTOR VEHICLE THEFT/TAMPERING WITH AUTO, 2019-03300280, 2019-03300275, 2019-03310014, 4800 block of 28th Street S. At approximately 11:34 p.m. on March 30, police were dispatched to the report of suspects tampering with vehicles. Upon investigation, it was determined the suspects were operating a vehicle previously reported stolen out of Washington D.C. when they struck a parked vehicle, causing theirs to overturn. The suspects then exited the vehicle, tampered with approximately four vehicles, before stealing a vehicle with the keys left inside and fleeing the scene. The occupants of the crashed vehicle are described as two black males and two black females. The investigation is ongoing.

The Fairlington Villages condo association acknowledged the break-ins in a statement posted on its website and social media Monday, writing:

Management is aware of the events over the weekend regarding vehicles being vandalized and police activity. As it is an ongoing investigation, the police has no information to release at this time. We will update the community as soon as information becomes available.

As a safety measure, if you’re outside at night, please be aware of your surroundings and please keep your phone with you.

Forty-one auto thefts have been reported in Arlington since January 1, up from 32 stolen vehicles reported in the same period last year, according to ACPD’s Community Crime Map.