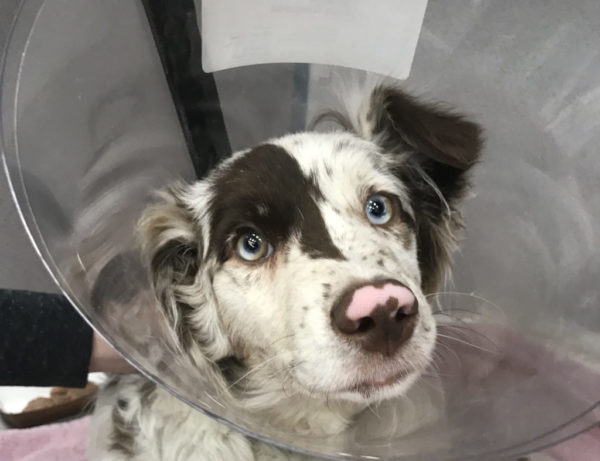 (Updated at 4 p.m.) More people than ever before are finding pet sitters online but it’s important to verify their services, the Animal Welfare League of Arlington says.

Apps like Rover or Wag have gained popularity by allowing people to book sitters or dog walkers with a few taps and even offering background checks.

“About five years ago you would only see a few dozen people,” Chief Animal Control Officer Jennifer Toussaint said of the apps. “Now you can find hundreds.”

However, as CBS News and other outlets have reported, the background checks don’t always turn up red flags with the people providing the walking and boarding services, sometimes with tragic results.

Joining the ranks of those whose pets have been killed or seriously injured in the care of a service provider found on an app: an Arlington resident who lives in the Boulevard Manor neighborhood.

The resident reached out to ARLnow about his six-month-old mini Australian Shepard, Hunter, who was hit by a car on Route 50 in March after escaping from the backyard of the dog sitter’s house.

The crash broke Hunter’s pelvis, damaged his organs, and will result in one of his legs being amputated soon, according to documents shared by his owner, who asked ARLnow not to share his name.

“My kids cried themselves to sleep for the first week after the accident because we honestly did not know for sure if Hunter would survive or whether he had major internal injuries,” said Hunter’s owner.

Chief Toussaint confirmed the sitter was cited by animal control with class four misdemeanor offenses in connection with the incident, including Running At Large, and was convicted in April on three charges. One of those charges was Repeat Offenses, because the woman had also been cited in December of 2018 for failing to control dogs, according to court records — something the Rover app’s background check did not reveal.

The sitter didn’t know the puppy had escaped right away because she had left the dog in the care of her children, messages reviewed by ARLnow indicate, an arrangement Hunter’s owner said he wouldn’t have agreed to if he had known.

“Unfortunately, my family is now suffering from this failure and we have a puppy that was severely injured in March and is now permanently crippled with tens of thousands of dollars of veterinary bills,” the owner said. He said Rover offered to reimburse at least part of the $20,000 in vet bills.

Toussaint said incidents with sitters found online — be it through Rover or social media — are not common but they do happen. Recently, an Arlington resident called animal control after finding out their cat sitter hadn’t visited the house in two days thanks to alert system on their front door, she said.

Rover spokesman Dave Rosenbaum declined to provide exact numbers, but told ARLnow that the number of incidents pet owners experience on the app is an “extremely small” part of the 500,000 total bookings made in the D.C. area so far.

Toussaint says animal control usually notifies the app makers when one of their sitters is cited. The company then removes the person from their service provides. The sitter connected to Hunter’s injuries is now banned from Rover, both Rosenbaum and Toussaint confirmed, but the company said they never received notice of the sitter’s first citation.

“We did not hear from Arlington animal control,” said Rosenbaum today (Wednesday). “Had we, we would’ve removed the sitter from the platform.”

One of the difficulties in regulating apps like Rover, Toussaint said, was that they don’t fall under the Virginia’s code for “boarding facilities” which have to be inspected and meet certain standards. However she said online pet sitters do still fall under state code as custodians of animals, and can be cited for failing to provide adequate care for people’s pets.

“That’s where we as officers can hold these pet sitters accountable,” she said.

Rover advertises a background check system for its workers and Rosenbaum said it encourages people to submit complaints at any times, but he did not respond to questions on whether Rover checks for new criminal records after employing a worker.

Last week, CBS reported that 12 families said their dogs died while workers from Rover were supposed to be caring for the animals. Two additional families also reported dog deaths during care from Rover’s competitor, Wag.

Rover currently has an A+ rating on the Better Business Bureau but averages a one-star rating from consumers, who have submitted 70 complaints to the website.

The Better Business Bureau is currently investigating Wag’s advertising claims, including their promise of a “rigorous screening process that includes a background check.”

In October, the bureau said it would continue monitoring reports it received that, “show that the company has a pattern of complaints concerning consumers consumers allege that items have gone missing from their homes after using the Wag app to walk their dog(s).”

In the meantime, Chief Toussaint said incidents in Arlington are rare but animal control has a few tips on how Arlington residents can do their own background checks on sitters:

Read more →
More Stories
Peter’s Take: What Arlington Should Do to Prepare For More FloodingBoutique Life at 672 Flats