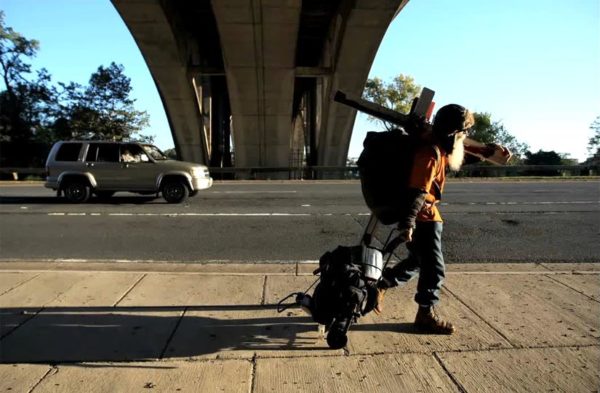 The number of people experiencing homelessness in Arlington County may have decreased, according to new data released last week.

Homeless young adults and the incidence of chronically homeless adults, however, may be on the rise.

A total of 215 individuals were reported as homeless in Arlington, according to the most recent Point in Time (PIT) data from the Metropolitan Washington Council of Governments (MWCOG). That’s six fewer people than last year’s count.

By comparison, 232 people were found to be homeless in the county in 2017, which represented a spike upward from 174 in 2016. Arlington’s homelessness rates peaked in 2010, with 532 recorded as living without a home.

PIT is a nationwide census that recruits local volunteers to tally the number of people they find living on the streets and in shelters during one night in January every year. The volunteers also collect information on the people they tally, like whether they are living alone or with family members. The Department of Housing and Urban Development uses the resulting data to allocate resources nationwide.

“Overall, the Point-in-Time numbers continue to validate the strategies laid out in our Action Plan for Ending Homelessness and the ongoing work of our Continuum of Care,” said Kurt Larrick, assistant director of the county Department of Human Services. “We had an overall decrease of 3 percent this year.”

Larrick added in an email that the county will use the PIT count along with its year-round data to address challenges and pinpoint needs.

“Limited housing options are probably the biggest barrier, particularly to those experiencing chronic homelessness and those who have disabilities and housing barriers,” he said “We know that combining housing with rental subsidies and support services tailored to individual needs is the most effective way to help people attain stable housing, and this will continue to be part of our overall strategy moving forward.”

During last year’s PIT count, Arlington began seeking out more information about kids and young adults who were living on the streets or in one of the county’s five shelters. The data collected in January found six young adults ages 18 to 24 who were homeless on their own, and four who were with their families — the highest such count in at least the past five years.

Sixty-six people were counted in 2019 as living homeless with their families in the county, down from 77 the year before. Of the 66 family members counted this year, 26 were children. 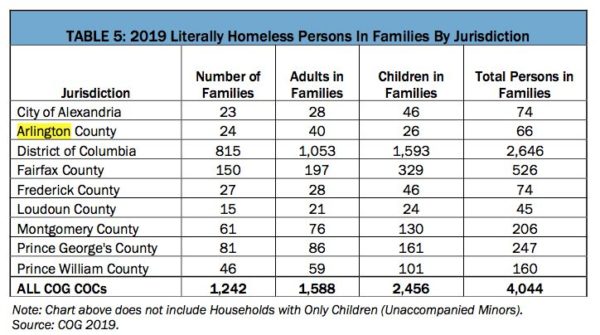 MWCOG wrote on its website that 9,794 homeless people were counted across the Greater Washington Area, making this, “the fewest number of people counted since the annual regional census — or Point in Time (PIT) count — began 18 years ago.”

Regionwide, the number of veterans recorded as experiencing homelessness decreased by 6 percent. But in Arlington two more veterans were recorded in 2019 compared to 2018, according to the full 180-page MWCOG report. Arlington also recorded 17 additional adults who are considered “chronically homeless.”

The report notes that area governments “attribute the slight increase in the number of residents counted as chronically homeless from 2018 to 2019 primarily to a lack of affordable housing options, particularly permanent supportive housing, to enable more residents to exit homelessness and remain stably housed.”

Overall, the report noted that a majority of the adults in homeless families counted in Arlington (58 percent) were black compared to 35 percent who were white. 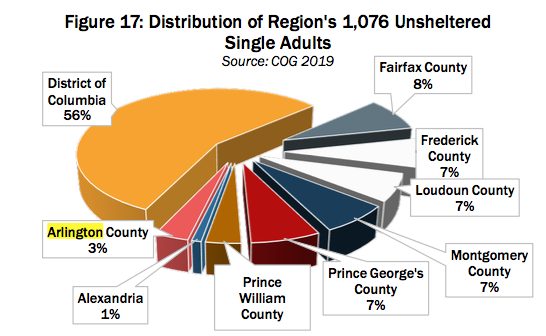 The report also noted that the rate of employment for single adults experiencing homelessness has hovered under a third of all adults for the last five years. However, in Arlington, the percentage of homeless adults who are employed increased from 16 percent in 2018 to 24 percent in 2019. 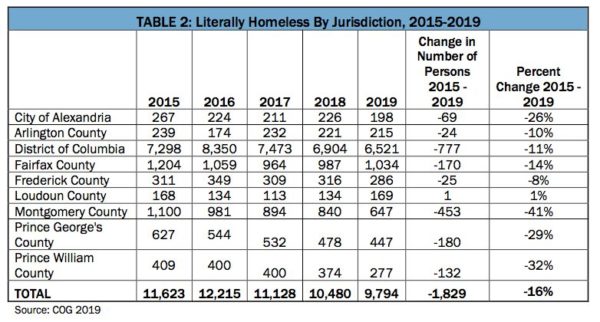 Some critics of PIT count data say the true number of individuals experiencing homeless could be 10 times higher because of the problems inherent in collecting the data.

The National Law Center of Homelessness and Poverty has cited issues with the count not including homeless individuals who may be couchsurfing, and that volunteers are likely to miss some unsheltered people not easily visible from the street. 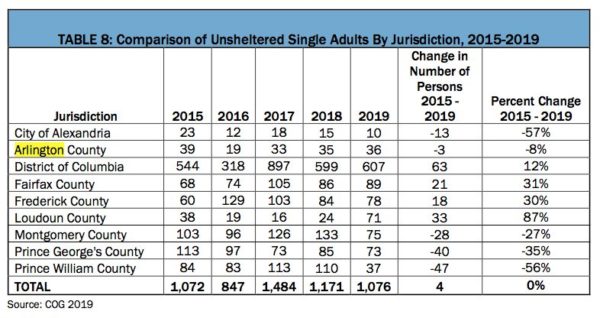