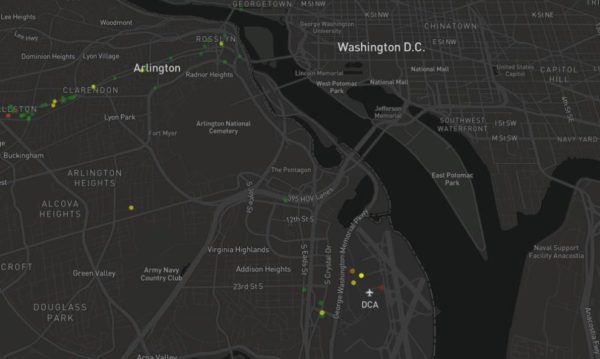 (Updated at 4:05 p.m.) The co-creator of the popular car violation tracking app “How’s My Driving?” is eyeing an expansion across the Potomac.

Mark Sussman is the data scientist behind the app, along with his partner and co-creator Daniel Schep, a software engineer. Sussman told ARLnow today that he’s considering expanding the service from D.C. to Arlington because of the demand he’s seen over the past few months.

“It’s almost been an aggressive demand from some Arlington folks,” he said, laughing. “We obviously have folks who live in Arlington and work in D.C. and have been wanting to use it.”

Sussman and Schep built a Twitter bot last July that lets Twitter users tweet problems like vehicles parked in bike lanes or blocking sidewalks. If a user tweets a moving or parking violation at the bot with the vehicle’s license plate number, the bot fetches data from the D.C. DMV on how many outstanding citations or violations the driver has racked up on that vehicle. 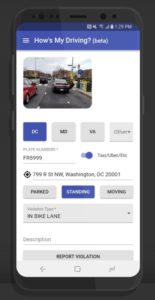 The developers later announced they’d be beta-testing a smartphone app version of the service. Since then Sussman says about 1,200 people have volunteered to test it. The app automatically tweets the citation information that results from people’s reports to D.C. parking enforcement authorities in an effort to encourage enforcement.

Several Arlingtonians have joined the beta-testing group, despite the fact that “How’s My Driving?” isn’t yet connected to any Arlington database that could show the number of violations.

This summer, Sussman said he and Schep are planning to start talking to authorities in Arlington about whether the app can help with traffic enforcement in the county, and whether they can integrate it with the current record-keeping systems for citations. Parking citations are publicly available with license plate numbers in Arlington. But unlike D.C., Arlington app users need a citation number in order to look up moving violations, such as speeding.

The record amount for the most outstanding fines accrued by a single vehicle in D.C. flagged by the bot so far is $36,594. The majority of the fines for the Virginia-registered vehicle were from speeding violations.

“If that information was provided to officers on the front end instead of having them have to look it up, then they’d be much more likely to do the right thing,” said Sussman. “While it may seem like a benign to some [to report] standing in a bike lane, it’s a proxy for more dangerous behavior.”

So far, users have reported 74 parking and moving violations in Arlington, with the majority clustered in Clarendon and around Reagan National Airport.

The locations made sense to Sussman. “A third of these violations are for bike lane violations,” he said. “These are notoriously abused bike lanes.”

Due to a dedicated community of pedestrians and cyclists who report violations spotted around town, the bot has exploded in popularity since starting last year. “Currently, we’ve had a little over 7,000 submissions that represent over $2 million in the District of Columbia,” Sussman said, of the total fines reported.

In the future, Sussman said he and Schep are considering doing away with the Twitter bot altogether to avoid gaining a reputation as “vigilante social media shamers” and focus more on integration with government systems, to help with their main goal of improving enforcement.

Twitter users would, of course, still be able to tweet about what they find out from the app on their own.

“We just don’t want it to be the main vehicle that people use for enforcement,” he said.