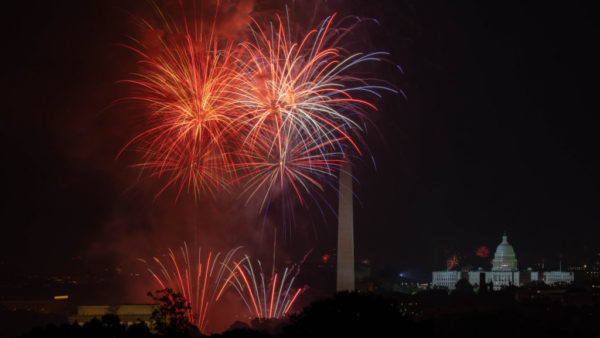 (Updated at 1 p.m.) There are a number of ways to celebrate America’s independence in Arlington this year.

This year’s federal firework show on the National Mall was moved because of President Trump’s “Salute to America” rally at the Lincoln Memorial from 6:30-7:30 p.m., which will likely include a speech, military flyovers, and protestors.

The national fireworks display will blast off from West Potomac Park instead. It is scheduled to run from 9:07-9:27 p.m. and will be visible from most places across the Potomac that Arlington residents are used to.

If the president’s planned Fourth of July rally in the District isn’t for you, here are some places in Arlington to watch the show:

Several neighborhoods are also hosting parades for those who prefer to eschew the crowds at fireworks, including:

The Arlington County Fire Department is asking residents who plan to light their own fireworks or have their cookouts to follow these safety tips for fire and injury prevention.

On average, 280 people go to U.S. emergency rooms every day with fireworks-related injuries in the month around the July 4th holiday.  The Arlington County Fire Prevention Office wants everyone to enjoy the 4th of July this year by keeping it safe. https://t.co/Iw5bJFU0o7 pic.twitter.com/qiMRt2CZZZ

SoberRide will continue its holiday tradition of offering free Lyft rides to prevent drunk driving. The organization said 746 people in the Greater Washington area used the service during Fourth of July last year.

Users can check the SoberRide website on Thursday, July 4 at 6 p.m. for the promotion code that will give free rides between 7 p.m Thursday and 2 a.m. Friday.