Fifteen new buses, along with new crosswalks and streetlights, are among the changes expected in the new school year, which is set to start in two weeks for most students.

The changes center around two new Arlington schools — in Rosslyn and Arlington Heights — and the renovated former home of H-B Woodlawn (now a middle school) in Cherrydale.

The Heights Building accommodate students from H-B Woodlawn Secondary Program as well as the newly-renamed Shriver Program for students with special needs. With more than 700 students now commuting to Rosslyn on a daily basis, APS is working to make sure traffic keeps flowing and students stay safe near the school at 1601 Wilson Blvd.

“All buses will load and unload behind the school on 18th Street, which will be closed to general traffic,” APS spokesman Frank Bellavia said. “During the day, there will also be an increase in pedestrian traffic as students leave campus for during the school day.”

The good news is that the 2019-2020 school year marks the end of construction on and around the Heights building.

H-B Woodlawn and Shriver students used to travel from across the county to attend class in their old school building at 4100 Vacation Lane, now renamed and rebuilt as the Dorothy Hamm Middle School. Now that they’re gone, the middle school students who will take over will be from the neighborhood around the school, and will likely arrive earlier in the morning.

“Now that it is a neighborhood middle school, commuters and residents can expect more students walking to and from school in the early morning hours,” said Bellavia.

The county has taken several steps to keep these neighborhood kids who walk to school safe, including: 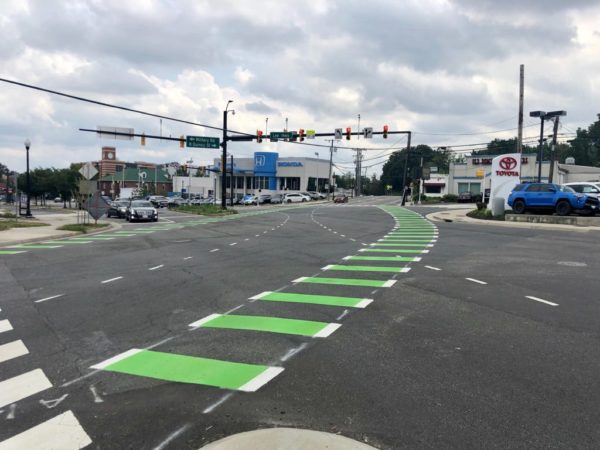 At the “five points” intersection of Military Road, Vacation Lane, and Lorcom Lane near the school, Bellevia says APS worked with the county’s Dept. of Environmental Services to make several changes this year, like:

Because of the varying class start time, Bellavia cautions drivers to watch out for students crossing at 1st Road S. and Old Glebe, and 2nd Street S. and Old Glebe. He also noted that buses will be arriving in the area in the mornings until 9 a.m. and departing in the afternoon until 4 p.m.

We want to let you know about changes in traffic patterns & student transportation on our roads. Safety is our top priority and we are working closely with our partners in @ArlingtonVA to ensure safe routes around our schools. https://t.co/n3dkYHtG6l @DHMiddleAPS @RosslynVA