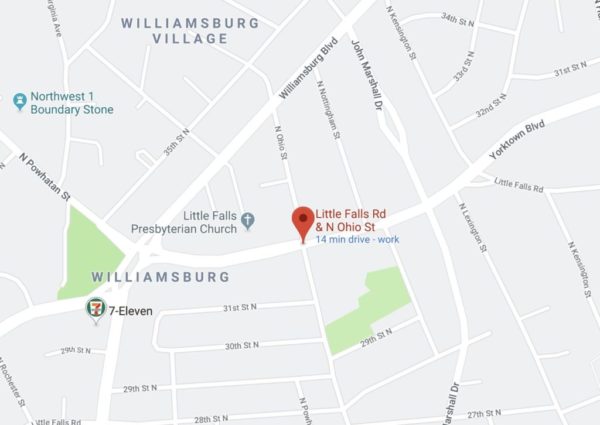 Earlier: A woman suffered critical injuries after being struck by a vehicle in Arlington’s Williamsburg neighborhood last night, police say.

The pedestrian crash happened around 8:15 p.m. Wednesday at the intersection of Little Falls Road and N. Ohio Street, near Nottingham Elementary School.

“Police were dispatched to the report of a pedestrian-involved crash,” said Arlington County Police spokeswoman Kirby Clark. “The pedestrian, an adult female, was transported to an area hospital with critical injuries.”

Clark said the driver of the striking vehicle remained on scene. ACPD’s Critical Accident Team is investigating the crash.

The victim, whose name and age were not released, remains in critical condition in a local hospital as of noon Thursday, according to Clark. The woman was walking three dogs at the time of the crash, one of which died at a local animal hospital and another of which was injured, she said.

On a neighborhood listserv, a local resident noted that the scene was just steps from where a local mother was struck and killed by a passing truck in 2014.

“It’s been ANOTHER accident waiting to happen!” the resident wrote of the intersection, which is only a 2-way stop . “The children on my block, including my own, saw this poor woman bleeding in the road. I don’t want them or any of us to have to see this again.”