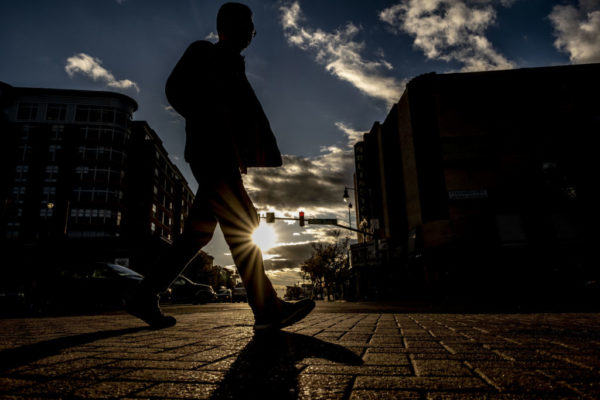 The following op-ed was written by D. Taylor Reich, a native of Arlington and a graduate of H-B Woodlawn, whose writings have also appeared on ARLnow sister site Tysons Reporter.

I am not a woman or a man. I am an Arlingtonian.

In the twenty-first century, gender is social limitation. Biological differences between sexes are irrelevant in the age of AC, GPS, and iPads for middle-schoolers. ‘Gender roles,’ we often say, are archaic and obsolete. Gender limits women’s salaries to four-fifths of men’s, and limits men to emotionally-stunted friendships and a suicide rate three times higher than women’s. It limits girls from enjoying the thrill of a touchdown and boys from the elegance of a flowing dress. It limits how we eat, how we speak, and how we love.

But gender doesn’t limit me. I deny its two traditional roles. My friends refer to me as ‘they,’ rather than ‘she’ or ‘he.’ At work, I might wear a necktie, button-down, and a skirt. I don’t deny that I grew up with a gender, but I have chosen to live beyond it.

I call myself ‘nonbinary.’ Others use other terms: ‘gender nonconforming,’ or ‘two-spirit,’ or ‘genderfluid,’ or ‘enbie.’ My generation has found many labels for an identity that defines itself through freedom.

This life comes with its own limitations. I uninstalled some dating apps because they don’t include nonbinary options. At work, I have to walk up an extra flight of stairs to get to the gender-neutral bathrooms (which are legally mandated in D.C., but not in Arlington). Sometimes people look at me funny on the Metro. But I’m freer than I ever could have been as a boy or a girl.

On a sunny Saturday a few weeks ago, I visited the new makerspace at the Central branch of the Arlington Public Library. It’s an inspiring place, embodying our community’s respect for learning. In the building where I learned as a child to love to read, people are finding creativity in mediums from embroidery to 3D printing. That afternoon, I learned to make buttons.

Buttons: they’re for politics, they’re for low culture, they’re for art, they’re for identification. I spun off a quick design. A shiny button an inch across, with the blue-pink-white-pink-blue transgender flag in the background (flip it upside-down and it’s the same). In the center, I drew the outline of our 26 square miles. Superimposed, three words: “Arlington is nonbinary.”

“Arlington is nonbinary.” What does that mean? For me, it holds three truths.

In the first sense, it’s literally true. Like me, this county is neither a woman nor a man. No geographic locale is a woman or a man. Maybe this is pedantic, but I think it’s a nice thing to remember.

In a second interpretation, Arlington is nonbinary because it is an exceptionally welcoming place for those of us who are nonbinary or transgender.

After I’d punched out a few dozen buttons, an adult at the next table interrupted.

She was a teacher at one of our middle schools, and had recently seen a student through a gender transition. The student, she said, never faced any bullying — at least, not for being trans. The teacher wanted a single button to put on her desk, and I gave her handfuls of them.

The third truth is a little harder to explain.

When I was eighteen, I left our county to study at a college hundreds of miles away. The hardest question I faced wasn’t on an exam. It was “where are you from?”

‘D.C.’ was a lie and I knew it. ‘Virginia’ was technically true — but my friend from Newport News would never let me live it down. But really, I’m from the District and the Commonwealth. I love hearing GoGo and I’ll complain for hours about taxation without representation. I can recite the history of the Jamestown colony and I know where to get the best apple butter in the Shenandoah. The Washington Post and the Dogwood Daily vie for the top story on my newsfeed. It’s not that I’m neither a Virginian nor a Washingtonian, it’s that I’m both.

Was I from the North or the South? I grew up watching the then-named Washington-Lee Generals play the Yorktown Patriots — I’m no Yankee. But for a long time I thought a hushpuppy was a type of poodle, and last time I had a night out in Nashville I was called a carpetbagger.

Was I from a city or a suburb? Mine was a cookie-cutter single-family home on a wide road, walking distance to the Metro. In high school, I spent my summer days by the club pool, and my summer nights at concerts on H Street NE. Once again, I was from both places; not neither, not just one

Not D.C., not Virginia; not Northern, not Southern; not a city nor a suburb — and not limited, not restricted, not defined. There are many places that are in-between, but Arlington is never a border town in the sense of El Paso or Niagara Falls. Those are places where binaries are most intensely felt. Arlington is a place where binaries lose their meaning.

It’s far from perfect. Like any participant in the ‘Arlington Way,’ I have more than my share of gripes. Even as our population grows, the proportion of people of color is lower than it’s been for decades. Rising housing prices mean I won’t be able to afford to stay here much longer. Teachers don’t get paid enough.

Even in our failings, though, Arlington and I are both nonbinary. It and I are a county and a human being unrestrained by the inherited chains of a social constructs. Because we are nonbinary, I can be Taylor. Arlington can be itself.

If you would like to order ‘Arlington is Nonbinary’ buttons, you may do so at DavidTaylorReich.com. Your donation will be given to local organizations that offer direct aid to transgender individuals experiencing homelessness.