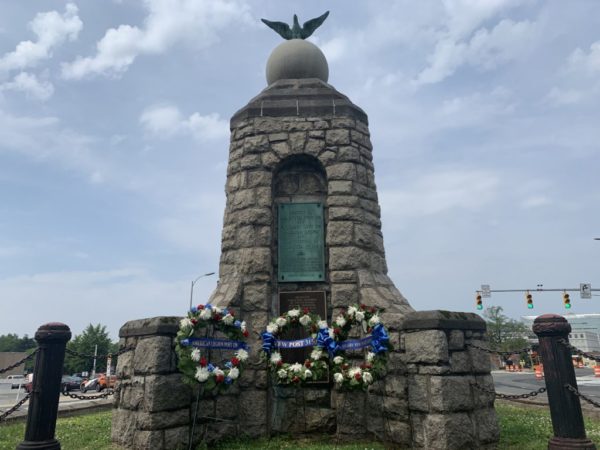 The Arlington County War Memorial in Clarendon is getting a significant addition this Veterans Day.

The memorial, which overlooks the intersection of Washington, Wilson, and Clarendon boulevards in Clarendon Central Park, will receive 10 new markers on Monday, November 11.

An unveiling ceremony will take place at 11 a.m. on Veterans Day, hosted by the Arlington chapters of the American Legion and Veterans of Foreign Wars.

One of the new markers will delve on the history of the memorial itself, while the others will highlight five armed conflicts over the last two centuries in which Arlington residents lost their lives.

Over two years of work and study has gone into the project, said program coordinator Cynthia Torres.

“Historic research undertaken for the project revealed the names of five additional World War I soldiers whose sacrifice had previously been unrecognized,” said Torres.

Last year, to commemorate the centennial of the World War I, the county’s Historic Preservation staff received partial funding from the U.S. World War I Centennial Committee to develop the historical markers.

“The overall goal of the interpretive project is to enhance visitor engagement with the Clarendon War Memorial by explaining its history and community significance,” said Torres.

The memorial was built in 1931 and has been moved around Arlington several times, but all with the original plaque intact. In May the World War I plaque on the memorial was removed to correct an 88-year-old typo.

The plaque has been the subject of some controversy for its separation of two “colored” soldiers killed in WWI — listed as Arthur Morgan and Ralph Lowe — from the other 11 soldiers.