County officials have stripped a requirement that defendants plead guilty before becoming eligible for a jail diversion program for those with mental illnesses.

Staffers note they made “significant changes” to a newly-released draft document for the proposed program after activists and local officials expressed concern over the guilty plea requirement, among other aspects to the program.

The new draft allows participants to choose between pleading or not pleading guilty before requesting to participate in the voluntary program meant to give people with mental illnesses access to the treatment and social services they need.

The new draft kept language forbidding people from participating who have been charged with violent felony crimes or sex offenses, though it noted that the “ultimate decision lies with the judge.”

The county will hold another public meeting on the topic this upcoming Monday, November 18 from 6-8 p.m. at the DHS headquarters (2100 Washington Blvd.)

During a meeting organized by activists in August, one mental illness policy expert panelist noted that if the docket “requires a guilty plea it literally can’t decriminalize mental illness.”

Public defenders in Arlington and Fairfax County also expressed concerns that holding a potential jail sentence over a defendant who fails the docket program is “sending the wrong message.”

Another person who protested the plea requirement was Planning Commission member Daniel Weir, who spoke in his personal capacity.

“If we’re going to have a post-plea docket we’re going to have to look ourselves in the mirror and be willing to accept the collateral consequences that we’re exposing people to go through this program,” said Weir during the July meeting, referring to the recent threat of ICE raids in the area.

Another change is that the new draft “broadened” eligibility criteria to include adults who have a “serious mental illness, developmental disability and/or dually diagnosed based on the diagnosis, intensity, and duration of symptoms.”

The inclusion comes after Juliet Hiznay, a special education attorney by training, expressed concern that the original draft proposal would exclude defendants with certain mental illnesses and disabilities.

The most recent state data available indicates that 20% of Arlington inmates suffer from some sort of mental illness, with bipolar and schizophrenia diagnoses making up the majority of cases, though mild depression and anxiety were also recorded. 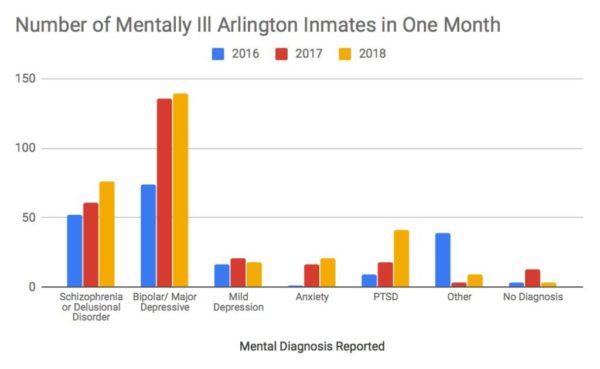 Defendants who have been charged with felonies could now also be eligible for the program “on a case by case basis” — a change from the original draft which specified that only people with misdemeanor charges could be eligible.

One question unanswered in the new draft is whether residents of the City of Falls Church (which is prosecuted by the same Commonwealth’s Attorney as Arlington) are eligible for participation.

After Arlington finalizes its proposal, it must submit it to the Supreme Court of Virginia’s Office of the Executive Secretary for approval. Originally, leaders intended to submit the application in September, but that was delayed after some local officials and community members urged leaders to spend more time gathering feedback.

The revisions and public meetings may have quelled criticism of the county’s communication during the process of creating the mental health docket, but at least one still remains. Commonwealth’s Attorney-elect Parisa Dehghani-Tafti said she was not invited to be a part of any of the official meetings about the initiative.

“I have not been to any of the official public meetings,” said Tafti. “And I haven’t been invited to the any of the private meetings.”

Tafti clarified, however, that she did attend the August public meeting hosted by the local activist group.

If approved by the Supreme Court, Arlington County Sheriff Beth Arthur said the program could stretch her office’s resources for pre-trial services, which she said are “already bursting at the seams.”

The sheriff, who won her campaign for re-election earlier this month, added that she is hopeful the county will allocate her office additional funding to cover it in the upcoming fiscal year 2021 budget deliberations.