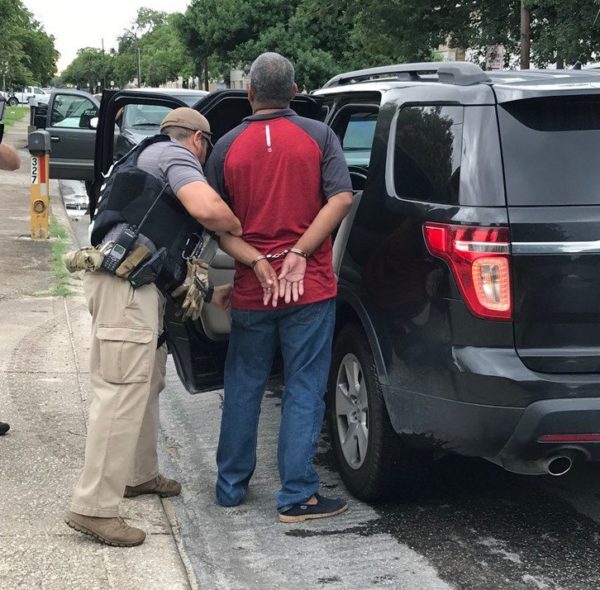 Two Virginia organizations are looking to help as Arlington braces for immigration raids in the wake of President Trump’s deportation threats.

The Falls Church-based Legal Aid Justice Center is collaborating with the Virginia Coalition of Latino Organizations to train people on what rights the county’s immigrant community has and how they can help. The legal aid organization will be hosting the free event at the Syphax Education Center (2110 Washington Blvd) from 3-5 p.m. tomorrow (Thursday).

Simon Sandoval-Moshenberg, the legal director of the Justice Center’s Immigrant Advocacy Program, said the event is aimed at teachers, service providers and “basically anyone who serves the immigrant community who is wondering what to tell people right now.”

Attendance is free but people are asked to RSVP to on Facebook.

The Justice Center will review what to do if U.S. Immigration and Customs Enforcement (ICE) stops someone or knocks on their door, as shared here by the American Civil Liberties Union.

Arlington County Board Chair Christian Dorsey during a recent Board meeting criticized Trump for issuing “a vague threat” on Twitter.

“If this latest escalation proves to be real, rest assured that Arlington does not participate in federal immigration enforcement and will not be assisting in any mass round-up or deportation of families or the separation of yet more children,” Dorsey said. He urged anyone who feared they would be targeted for deportation to visit the county’s website with resources for immigrants and to contact the Legal Aid Justice Center if they had legal questions.

In response to a tweet from President Donald Trump regarding immigration, and in an effort to provide context and comfort for the community, the Arlington County Board issued a statement during Tuesday's Board Meeting. pic.twitter.com/GS6FzjwzLH

Last week, Trump announced that ICE would deport “millions” starting Saturday. Despite the president calling off the threatened raids, ICE agents raided several homes and businesses in D.C. over the weekend and detained at least two parents, according to the Washington City Paper.

After the initial announcement “the level of fear in the immigrant community spiked to early 2017 levels, which is to say, extraordinarily high,” Sandoval-Moshenberg said.

After Trump took office in 2017, immigrant families in Arlington began withdrawing children from food stamps, stopped filing domestic violence protection orders in court and kept kids home from school out of a fear of deportation, according to Sandoval-Moshenberg. When the Legal Aid Justice Center organized the “Know Your Rights” events two years ago, attendance was up — between 100 and 200 people.

Sandoval-Moshenberg noted it’s too early to tell if families are reacting similarly now but, “our phone is ringing off the hook, that’s for sure.”

The latest round of raids was scheduled to start in 10 cities including D.C. Sandoval-Moshenberg said people didn’t realize this likely includes Northern Virginia because ICE’s Washington Field Office is located in Fairfax and covers the Greater Washington area.

Data from Syracuse University’s project tracking immigration law enforcement indicates ICE arrests in Arlington spiked in May 2017 and remained relatively high through the first half of 2018, which marks the end of available data. 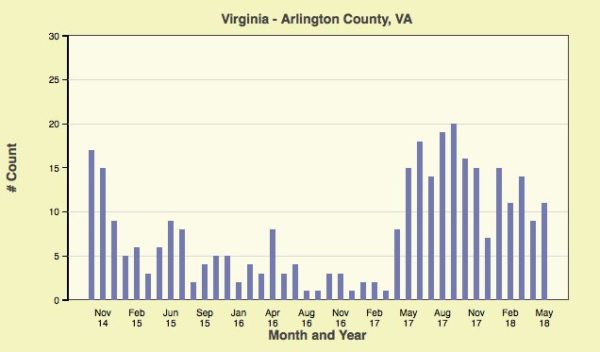 In his statement last week, Dorsey noted that the county awarded the Justice Center $100,000 in 2017 to represent immigrants facing deportation and has continued awarding grants ever since.

Sandoval-Moshenberg said the public funds from the county cover 80 percent of the Justice Center’s Arlington budget and has allowed them to conduct hundreds of free consultations with immigrants, host a few dozen “Know Your Rights” workshops and represent about a dozen people arrested by ICE.

The Justice Center secured bond for most of the arrestees in those cases — an important step with immigration cases because the time between court hearings can stretch on for years. But money is too tight to represent cases after bond, Sandoval-Moshenberg said, and it’s difficult to get cases in the first place when the system relies on the defendant’s family to seek out the legal aid organization.

“We don’t get an email from ICE every time they make an arrest in Arlington,” he said. “There’s no doubt that the cases we represent a tiny fraction of the total numbers of cases.”

County Manager Mark Schwartz said in 2017 that Arlington welcomes immigrants, but wasn’t able to shield them from federal immigration enforcement as some jurisdictions like D.C. have promised (and struggled to uphold).