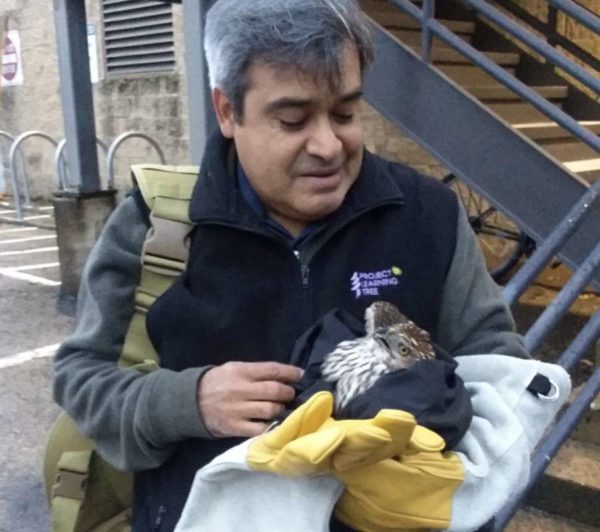 The holiday season can be quite stressful — but even more so when you’re a bird of prey who accidentally flies into an Arlington Public Schools operations building and can’t get out.

That happened this past Monday, at the county and APS yard on S. Taylor Street in Shirlington, but luckily Arlington County Natural Resources Manager Alonso Abugattas was on the case.

APS staff member Lauren Hassel said staffers heading out of the building that day heard banging coming from a covered, outdoor stairwell window, where the bird was seen seen frantically trying to fly out.

“Our building is about 200 yards from the Animal Welfare League but they were closed,” Hassel recounted. “A call to nearby Long Branch Nature Center led to a referral to our next door neighbors at the Dept of Parks and Recreation. Minutes later… Abugattas appeared with heavy gloves and a blanket. He spotted the bird through the window, put on his gloves, walked up the stairs and calmly retrieved the stressed out raptor.”

The county naturalist told a gathered crowd that the bird was a Cooper’s Hawk, and that it appeared to be unharmed. After a few photos, Abugattas unwrapped the bird and it flew off.

“Alonso is the ultimate wingman,” said Arlington’s Dept. of Environmental Services on Twitter.

According to National Geographic, the population of Cooper’s Hawks is increasing on the East Coast, especially in suburban areas.