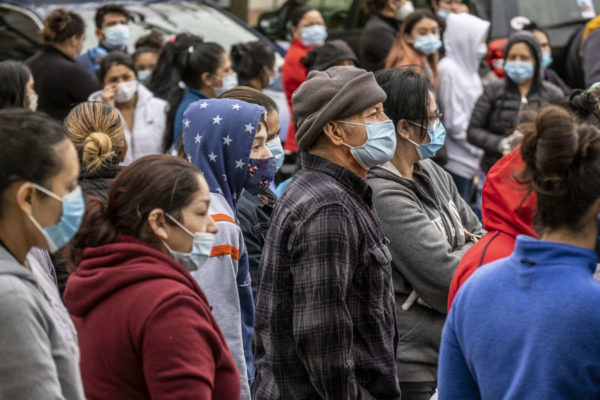 New demographic data from the Virginia Dept. of Health shows that 51% of COVID-19 cases in Arlington are among those identified as Hispanic or Latino, while according to the county only 15% of the population is Hispanic or Latino. That data only includes instances in which ethnicity was reported.

That disparity seems to be reflected in the geographic distribution of cases in Arlington. The two zip codes with the highest number of coronavirus cases and the highest test positivity rates are 22203 and 22204, both of which are home to sizable populations of Hispanic immigrants. 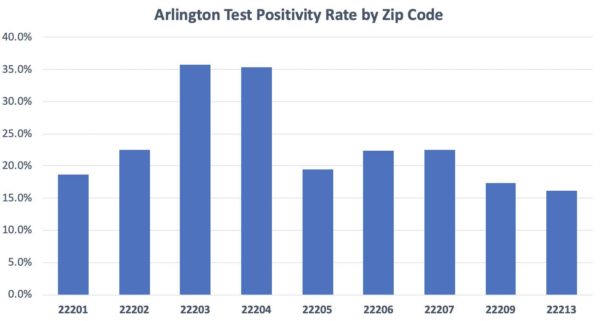 The demographic disparity is also reflected in statewide numbers: 46% of cases in which ethnicity is reported involve Hispanic or Latino residents, while only 9.6% of the state is Hispanic or Latino, according to U.S. Census data.

The spread of the virus among the Hispanic community is attributed, at least in part, to the fact that many are working in jobs deemed essential, in industries like cleaning, food production, retail and construction. The pandemic has also caused economic devastation for many lower-wage workers, leading to scenes like that pictured above, when on April 17 a huge crowd gathered for a food giveaway at a store on Columbia Pike.

“We have a problem, a big problem, with the level of assistance that the vulnerable Latino community is getting right now in Virginia,” former Arlington County Board member Walter Tejada told the Virginia Mercury. Tejada is president of the Virginia Latino Leaders Council.

“These are frontline workers — frontline heroes — who do not have the luxury of staying home and making a living doing Zoom conferences or teleworking. They wipe our floors, pluck feathers, pick crops, clean our rooms,” Tejada said. Other leaders quoted by the Mercury were similarly critical of the level of outreach and aid to Latinos in Virginia.

Arlington County, for its part, has been providing some of its coronavirus information in Spanish, and last week opened a new walk-up testing site on Columbia Pike.

“At the County-level, there has been a concerted effort to deliver our messages in multiple languages,” said county spokeswoman Jessica Baxter. “In early April we sent a mailer to every household in Arlington providing information on steps our community needs to take to slow the spread of the virus and made it available in Spanish, and 7 other languages on our website. Public Health, along with other departments, has been using the County’s network of trusted partners to help disseminate key information.”

“Public Health also dispatches volunteers to ensure individuals with confirmed cases of COVID-19 can meet their basic needs while under isolation,” Baxter added. “This includes having groceries picked up, prescriptions refilled and delivering cleaning and medical supplies, as needed and as available.”

Baxter said that while those who are Hispanic or Latino are overrepresented in the data, it’s not as bad as it currently looks due to issues with the information reported to the state health department. As of Monday, “Hispanics represent 28% of the confirmed cases” in Arlington, Baxter said in an email sent after the initial publication of this article.

“For half of our cases, Hispanic origin is not reported,” she said. “Original information about the ethnicity (Hispanic origin) of reported cases was missing from the doctors and laboratories that submit case reports to the Virginia Department of Health. Arlington, during its case interviews, has captured this information and is backfilling the missing information.”

“Unfortunately, the disparities and the inequities existed prior to this emergency and are being reflected in the communities being hit the hardest,” Baxter added.

Those who are dying from COVID-19, meanwhile, are disproportionately the elderly. 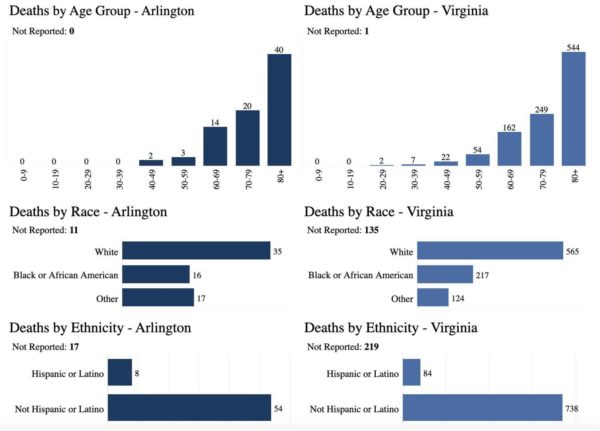 As of Tuesday morning, the state health department reported 1,688 cases, 331 hospitalizations and 79 deaths in Arlington. Of those 79 deaths, all but five — or 94% — were among those 60 years of age or older. More than half were among those 80+.

Statewide death statistics were similarly skewed heavily toward those 60 and older.

When ethnicity was reported, only 13% of deaths in Arlington were among Latinos, despite the much higher proportion of cases.

ARLnow continues to hear of significant outbreaks at local long-term care facilities with large elderly populations. While the state health department declines to report data from individual facilities, tipsters have described dozens of cases at Regency Care of Arlington in Pentagon City, Cherrydale Health & Rehabilitation Center on Lee Highway, and Brookdale Senior Living in Virginia Square, among others.

There are a total of 14 reported outbreaks in Arlington County, according to VDH data, including nine in long-term care facilities. Baxter said the county as been working with facilities to implement measures to stop the spread of the virus, while also working to keep older residents informed.

“We have been working with these facilities on implementing CDC and VDH guidance for infection control and preventative measures related to COVID-19,” she said. “We have provided guidance to those who have chronic medical conditions and [who are] over 65 to follow precautionary steps to protect themselves, including stay home, use delivery options for groceries and food, and limiting exposure to other people and wearing face coverings when it is necessary to leave their home.”