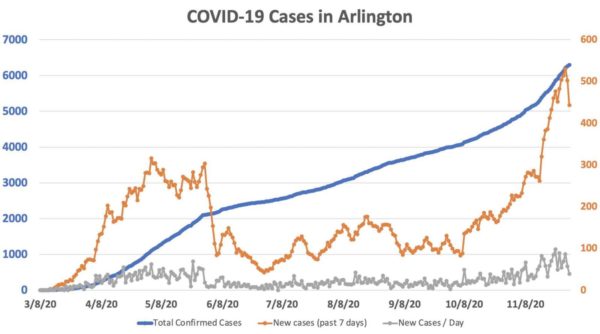 The level of new coronavirus cases in Arlington has receded a bit after reaching a new record over the weekend.

As of Sunday, the trailing seven-day average of daily coronavirus cases reached 75.7 — or 530 cases over the course of a week — a new local record. As of Monday, it’s now 63.3 daily cases, or 443 over a seven-day period, the lowest point since Nov. 21.

The county’s test positivity rate, meanwhile, is down to 4.8%, after reaching 7.8% mid-month. The decrease in the positivity rate comes as the level of testing reached a new peak leading up to Thanksgiving, with a seven-day moving average of 1,164 daily tests. 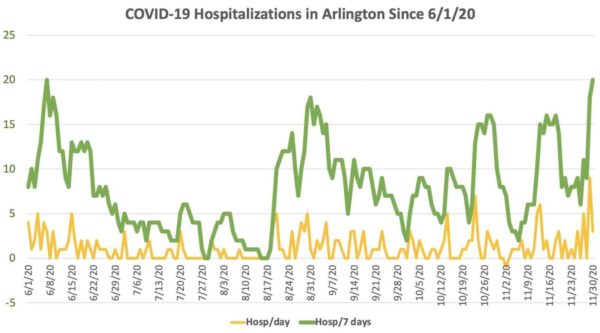 Hospitalizations are increasing statewide, as well.

“The number of Virginians hospitalized for treatment of COVID-19 hit a new high Sunday, as average numbers of new cases continued to set records both statewide and in Northern Virginia,” InsideNova reported. “The Virginia Hospital and Healthcare Association reported Sunday morning that 1,628 patients were hospitalized statewide, surpassing the pandemic’s prior peak of 1,625 set on May 8.”

InsideNova also reported over the weekend that Northern Virginia’s case average has doubled in two weeks.

No new deaths were reported in Arlington, however. According to Virginia Dept. of Health data, the last COVID-caused death in the county was reported on Nov. 23. The cumulative number of cases, hospitalizations and deaths in Arlington over the course of the pandemic is now 6,299, 589 and 157, respectively.

Despite the lack of recent local fatalities, the long-term debilitating effects of a coronavirus infection for some patients is coming into sharper view.

On Sunday, Washington Post food critic Tim Carman revealed that he and his wife were sickened by the virus earlier this month, and after a grueling battle with the disease at home, he’s still not back to 100%. Still others lose the senses of taste and smell, perhaps never to fully recover, or have lasting gastrointestinal problems, memory issues or loss of energy.

END_OF_DOCUMENT_TOKEN_TO_BE_REPLACED

More Stories
Postal Service: Send Packages Early to Arrive by ChristmasSpotted: A Couple on an Elaborate Date at Gravelly Point