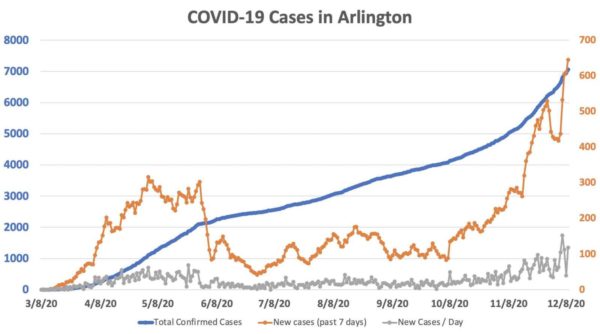 Arlington’s cumulative coronavirus case count has passed the 7,000 mark, only two weeks after it crossed 6,000.

Over the past two days, the county has reported 158 additional cases, 7 new hospitalizations and 4 COVID-related deaths. Arlington’s seven-day trailing case count is now 645, or an average of 92.1 cases per day, a new record.

The county’s test positivity rate currently stands at 8.4%, according to Virginia Dept. of Health data.

Disproportionately, the growth in cases in Arlington over the past month has been among those under the age of 40. In total, patients 39 and younger account for 63% of new local cases since Nov. 9. 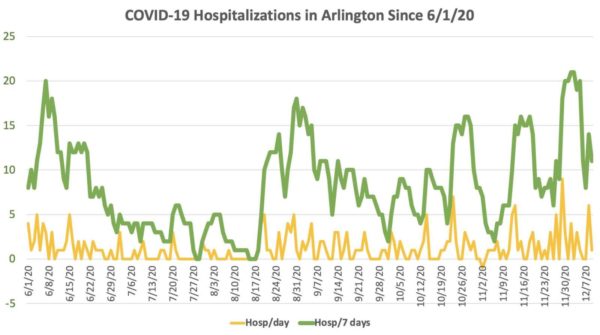 At Virginia Hospital Center, a tent used as a “secondary ER waiting room” was set up outside the hospital last week, for the first time since the spring. The number of coronavirus patients at the hospital is rising, according to ER chief Mike Silverman, in a weekly public social media post.

“As a hospital, our inpatient census continues to climb, hitting levels that we haven’t seen since May,” Silverman wrote on Friday. “We have almost double the number of positive cases in every way we look at data — symptomatic, asymptomatic, and total patients… Our positivity rate has almost doubled compared to any week in the recent past.”

In the Emergency Department, “the number of patients we put under COVID isolation protocol, is 15-20% more than we’ve seen the last several weeks,” Silverman added. “We’re admitting slightly more of these patients than the last few weeks.”

Silverman said the hospital is likely to start rolling out vaccinations for front line healthcare workers shortly after an Emergency Use Authorization is granted, perhaps as early as this week.

“Although the vaccine gives us hope and shows the light at the end of the tunnel, we likely have 6 months until there is mass vaccination,” he write. “Hospitals are full. This time everywhere. Every hospital. People are dying. I’m very worried about the number of COVID patients that we’ll take care of over the next couple of months as the surge continues. This is the time to remain diligent and safe.”

END_OF_DOCUMENT_TOKEN_TO_BE_REPLACED

More Stories
I-66, Numerous Roads Around Rosslyn to Close for Hotel ImplosionGarvey Still Confident in Dorsey, Despite Fraud Allegation in Bankruptcy Case