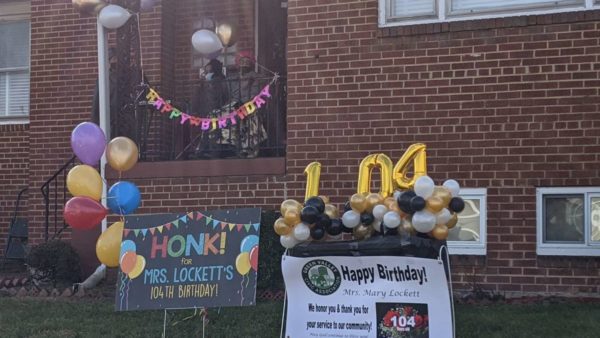 On Sunday afternoon, the Green Valley community celebrated the 104th birthday of Ms. Mary Sheppard Lockett with a drive-by parade of cars.

A line of nearly 40 cars plus Arlington police and fire vehicles drove by her house on S. Kenmore Street, honking and blaring sirens and shouting congratulations.

Happy 104th birthday, Ms. Lockett, a member of the @NauckCrescent community since 1939! We were happy to help her celebrate with a vehicle parade 🚓🚒 https://t.co/vHWh8J3Rsn

It was all a surprise for the centenarian, according to Green Valley Civic Association President Portia Clark.

Sheppard Lockett’s son and daughter brought her out on the porch, surprising their 104-year-old mother with a parade dedicated to her.

“She very much enjoyed it,” Clark says.

Sheppard Lockett is one of the oldest residents in Green Valley. Born in 1917 down the road in Bailey’s Crossroads, she moved to Green Valley in 1939. The house she currently lives in was built by her late husband Edward Lockett.

Several of her children live close by to assist, but she continues to make her own meals, clean her own house, and iron her own clothes. Waking up at 5 a.m. every day, Sheppard Lockett usually heads off to bed at 7:30 p.m., after Wheel of Fortune.

“She likes her independence,” says Clark.

Until she was 90, she drove her 1976 blue Chevy station wagon while, according to Clark, never receiving a ticket. Sheppard Lockett was particularly elated to have been able to witness the first Black U.S. president and his family living in the White House. She has also remained a member of Mt. Pleasant Baptist Church in Alexandria for more than eight decades.

Sheppard Lockett’s words of wisdom include “eat your blueberries daily.”

According to the 2010 census, Virginia had about 1,200 residents over the age of 100, with that number going up in recent years. In 2018, Arlington County recognized and celebrated 19 centurians, including Lockett.

She laughs, “There must be something in the water.”