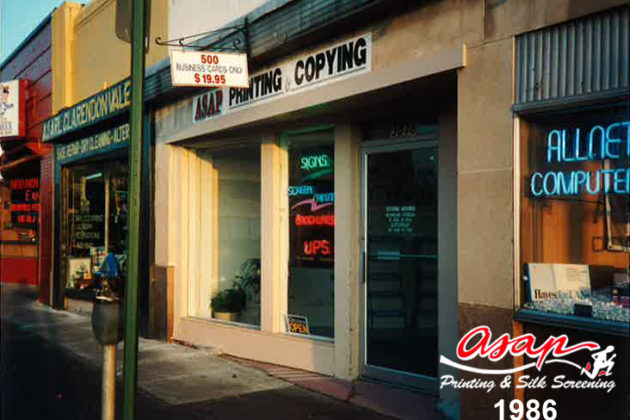 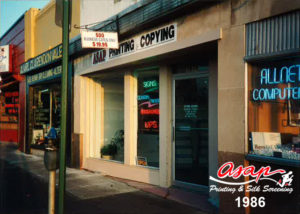 In 2016, ASAP Screen Printing turns 30 years old. This local Arlington print shop weathered many changes in the Clarendon neighborhood before moving to Ballston in 2014.

To celebrate, the shop is offering a 30% discount on any printing services to the first thirty customers to mention this article. For more information, email [email protected] or call 703-841-1977.

“It’s a very, very different time from when [ASAP] first started,” says Mohammad Shiekhy, owner of the shop. He had founded ASAP in 1986 with a friend as an investor, but back then he had been a systems engineer at MCI, not a printer. “I helped with the marketing, set up, and the paperwork, but my main job was engineering,” Mohammad explains. “Then in 1990 my partner was leaving, so I bought his share and started running ASAP full-time.”

Looking back 30 years ago, email was just coming in as a medium for communication, portable computers were rare, modems were still in use, and the cell phone did not yet even exist.

Mohammad remembers those years through the lens of the printing industry: Setup before print orders was done with the help of light tables, paste-ups, white out, and a trusty straight edge. Photo copying was done on Xerox machines that took up 400 square feet. Newsletters were folded in huge 20-foot long machines, and paper trimming was done on the Challenge cutter which had to be adjusted and controlled manually.

The printing industry was so different that even people in the industry today don’t remember how things used to be done.

In 1986, ASAP Screen Printing was originally opened at 3019 Clarendon Blvd., back when Clarendon Blvd ended at Highland Street. Then in 1990, the shop expanded out into 3018 Wilson Blvd. Business was booming.

“There were more than a dozen printing companies on Wilson Boulevard,” says Mohammad, “all the way from Rosslyn to Glebe Road. The presses would be running jobs all day and all night. It was a very busy time.”

He still recalls how the neighborhood of stores was laid out during that time. “There was a Sears where Baja Fresh is now … Vietnamese shops and restaurants from the corner of Highland Street to Washington Blvd. Whitlow’s on Wilson is where a leather furniture store used to be, and where Walgreen’s is now used to be a NTB Tires.”

By the time ASAP moved to a new Wilson Blvd location in 1997, the Clarendon neighborhood was already mostly transformed into today’s array of shops and retail stores. Printing franchises all across Arlington began to shrink and close one after another as the industry folded after 2000. And ASAP barely stayed afloat of it all, adapting and shrinking to survive the turbulent times.

“2008 was the worst,” Mohammad recalls. “The whole economy was in the dumps, but printing industry was barely alive. We made it with loyal customers and a little grace, but it was a real struggle.”

Now that times have calmed down, Mohammad reflects that he is uncertain of ASAP’s future.

“I have steered this ship for thirty years through many many difficult times and troubled waters,” he says. “Where ASAP will be in thirty more years, I could not say. In that time, I will no longer be its captain. Only one thing is certain: with determination and faith, I truly believe ASAP will live on for much longer than I can imagine.”