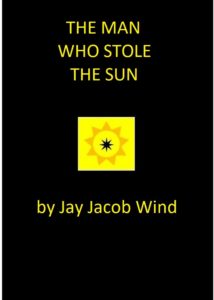 One of them, running his 21st Marine Corps Marathon, a genius inventor, visually-impaired, obsessed by his desire to see the Sun with his own eyes, gets a fusion reactor up-and-running the day before the marathon, in a building that just happens at mile 25 of the marathon, with unexpected consequences.

The other two marathoners are an Arlington County police officer, earlier disabled in action, and his 14-year-old daughter, a student at Thomas Jefferson Middle School.  Both of those characters are heroic, and both plan to run their first 26.2-miler the next day.

The rest of the ensemble cast includes assistants at the reactor — an exceedingly-bright engineer-programmer, a hard-working heavy-equipment operator, a highly-creative Ethiopian woman, and three brothers who were born in Russia but grew up with their freedom-fighter father in Syria; the inventor’s wife and cat; an intrepid reporter from the fictional Washington Today and her editor; Arlington County’s police chief, fire chief, and Thomas Jefferson Middle School middle school principal; a world-class computer software designer who solved two problems that we all face every day; and an unnamed youth track coach / track meet and marathon director.

Author Jay Jacob Wind said, “The story takes many twists and turns, but I always lay out clues in advance.  Anton Chekhov said, ‘If you say in the first chapter that there is a rifle hanging on the wall, in the second or third chapter it absolutely must go off.’  If you follow everything in the first half of the book, from 5:00 AM to 5:00 PM on the Saturday before Marine Corps Marathon, then you may be able to anticipate the fast-moving action in the second half, from 6:00 PM that Saturday to 8:00 AM on the Sunday of Marine Corps Marathon.”

“This book is the first-ever fiction novel to involve Marine Corps Marathon,” said Wind, “and you learn what it takes to train for and then run Marine Corps Marathon, but wait, there’s more.  Along the way, you learn quantum mechanics, astrophysics, the elusive “Theory of Everything,” Internet history, a little bit of Russian language, a lot of chess, the redemptive power of running, and how three very different families show their love in three very different ways.”

The book is available for $4.99 directly via amazon.com/dp/B0789VMT9D or the author’s web page www.arlingtonsunrise.com

The book will soon be available as a paperback.  You can reserve a copy for $10 via PayPal.com to [email protected]

One dollar of every sale goes to Old Dominion Eye Foundation.