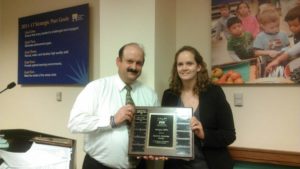 For her years of support and inclusion of Arlington special needs children in recreational classes and camps, Arlington Parks and Recreation Department’s Becky Suttell was presented with the 2014 Eileen K. Crawford Award by the Arlington Special Education PTA (SEPTA).

“SEPTA is proud to recognize Becky’s decade-long commitment to including and supporting all Arlington children — including those with special needs — in classes, recreational activities and after school care,” said Arlington SEPTA president Nicholas Walkosak after he presented the award to Suttell in a ceremony on Nov. 13.

As supervisor of the Department’s Therapeutic Recreation Office where she has worked since 2005, Suttell oversees and manages programs designed for individuals with disabilities. She ensures that people with disabilities are fully included in general recreation programs, through supports that can range from visual schedules one-on-one aides that facilitate inclusion.

Suttell’s involvement in the inclusion initiative started when she joined the County 10 years ago. Through her efforts, the program has seen the number of special needs kids included in standard programming grow by an average of 30 percent each year over the last 5 years.

Her dedication to inclusion was sparked when a parent attempted to place her special needs child into a standard summer camp. Suttell was asked to tell the parent that it would not be appropriate to include her child in the camp, that a specialized camp would be best. The parent cried when she was told this, lamenting the fact that the child received no inclusion opportunities at school or elsewhere. The team took up the challenge and worked to include the child. The child, finally included in summer camp, had an incredible summer with additional staff support. He was happy and the parent saw an increase in his communication. He was included in the camp every year after that.

“I am deeply honored to be named a recipient of this award, especially for something I believe in so strongly: the inclusion and support of all of Arlington’s children, including those with disabilities, in camps and class and other recreational activities,” said Suttell.

“Inclusion is a value, and Becky has accepted it as her mission to ensure that all children in Arlington, regardless of their ability, have the same recreational opportunities as their typical peers. I nominated Becky for this award because she should be recognized for her leadership: she is one of Arlington’s gems,” said Arlington Inclusion Task Force coordinator Tauna Szymanski, who has a 5 year-old daughter with autism.

This year, Suttell applied for and won a $10,000 grant from the National Inclusion Project to provide additional inclusion training to Parks & Rec staff. For a one-day workshop in October, she also invited private day care providers to ensure their charges benefit from inclusion before entering Arlington Public Schools.

SEPTA created this award to recognize the efforts of outstanding educators. The award honors the memory and contributions of Eileen Crawford, a longtime special education coordinator in Arlington Public Schools who was dedicated to supporting special needs children and their families. Crawford, who passed away in 2012, helped students achieve their goals and fostered a partnership between Arlington families and staff. The Eileen K. Crawford Award is presented annually by the Arlington SEPTA to an individual exhibiting Excellence in Special Education.